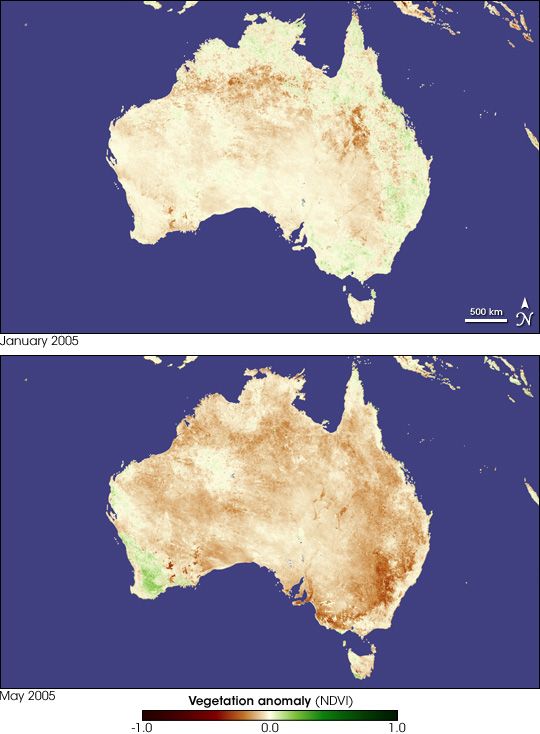 Widespread drought is settling over Australia as the country moves into its winter months. The drought is an extension of the drought that started in 2002 and is being called the third worst in Australia's history. The lack of rain delayed planting early in the season, and that has led the Australian Bureau of Agriculture and Resource Economics (ABARE) to predict a 17 percent drop in winter crop production if rain doesn't fall soon. In New South Wales, in the southeast corner of the country, production may fall by as much as 55 percent, says ABARE.

The impact of the long drought on vegetation is clearly visible in these vegetation anomaly images. Where vegetation, both crops and native plants, is less dense than average, the images are brown. Regions that are more densely vegetated than average are green. Between January, top, and May, bottom, vegetation has become progressively drier than average as drought has spread across the country. The animation above shows the drought's development over the five-month period.

These images are a composite of data collected by the SPOT Vegetation satellite and were generated at NASA Goddard Space Flight Center by the GIMMS Group under analysis agreement with the USDA Foreign Agricultural Service.

The drought that has been plaguing farmers in Australia since 2002 finally began to break with the coming of rain in June 2005.