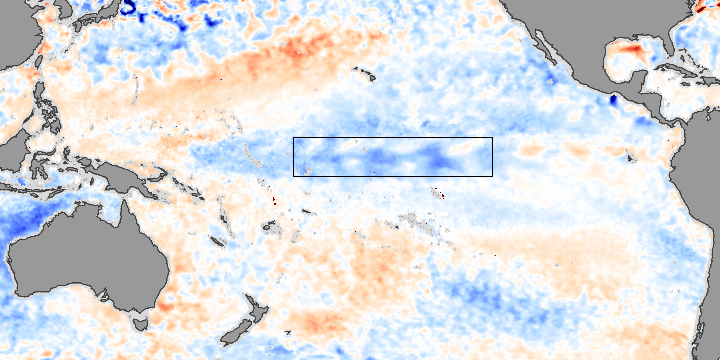 Researchers at the National Oceanic and Atmospheric Administration’s Climate Prediction Center reported the beginnings of a La Niña in early 2006. A La Niña is an occurrence of unusually cold water temperatures in the Pacific Ocean along the Equator (the precise area affected is outlined in black in the image above). La Niña and its opposite, El Niño, are linked to seesaw variations in air pressure over the tropical Pacific. These oscillations in air pressure and sea surface temperature can affect weather patterns across the globe.

Changes in sea surface temperature that become El Niño and La Niña events occur because of changes in the strength of the trade winds—usually steady surface winds that blow from east to west just north and south of the equator. Blowing over equatorial seas, trade winds push warm surface water westward, causing colder water to upwell in its place along the coast of South America. During La Niña events, the trade winds get stronger, more water is pushed westward, and more cold water wells up from the deeper ocean. This strong westward push from the winds results in warmer-than-normal surface waters in the western tropical Pacific, and colder-than-normal surface waters in the eastern tropical Pacific. El Niño, on the other hand, weakens the trade winds. Less surface water is blown westward, and less cold-water upwelling takes place in the eastern Pacific. Sea surface temperatures become warmer than usual.

During the Northern Hemisphere winter, La Niña may bring wetter-than-normal conditions over northern Australia, southeastern Africa, northern Brazil, and Indonesia. During the Northern Hemisphere summer, it may bring unusually wet conditions over the Philippines, and unusually heavy Indian monsoons. La Niña contributes to drought conditions in the southern and southwestern United States, and heavier-than-usual precipitation in the Pacific northwest and Tennessee Valley area. These regional weather effects are not always felt with every La Niña event, however, and it remains to be seen how the 2006 event will play out in weather around the globe.