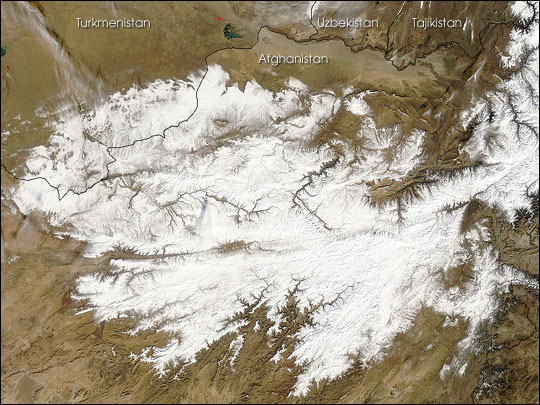 Snow is not unusual in Afghanistan; in fact, a deep snow pack is necessary if the country is to have water during the dry summer months. But January 2006 hit the Central Asian country harder than normal. Heavy snow and extreme cold destroyed or damaged at least 86 homes and killed 17 people, with twice as many more injured, reported the International Federation of Red Cross and Red Crescent Societies.

Much of the damage occurred after a blizzard hit the northernmost provinces particularly hard on January 31. On February 3, the Moderate Resolution Imaging Spectroradiometer (MODIS) on NASA’s Terra satellite captured this clear view of Afghanistan covered in snow. In addition to covering the rugged mountains that run down the spine of the country, the snow stretches across the populated northern plains where the damage was reported.

Despite the problems the January 2006 storms caused, Afghanistan needs its winter snow. Like the U.S. West, water during the summer comes from the melting snow pack in the mountains. Without the snow, farmers would have no way to irrigate summer crops. The snow is such an essential ingredient to the success of crops in Afghanistan that the Famine Early Warning Network (FEWS NET) monitors snow cover to help gauge how much food aid might be needed after the next growing season and harvest.

MODIS images such as this one help analysts at FEWS NET determine the extent of snow cover in Afghanistan. Knowing how much snow is in the mountains can reveal how much water will be available for crops during the next summer. If insufficient snow falls during the winter, FEWS NET can issue a warning to aid agencies and the government to alert them to the potential crop failure and a possible future need for food aid. The advance warning gives agencies and the government time to gather the resources they need to prevent a crisis. To read more, see Aiding Afghanistan on the Earth Observatory.

Daily MODIS images of Afghanistan are available from the MODIS Rapid Response Team.