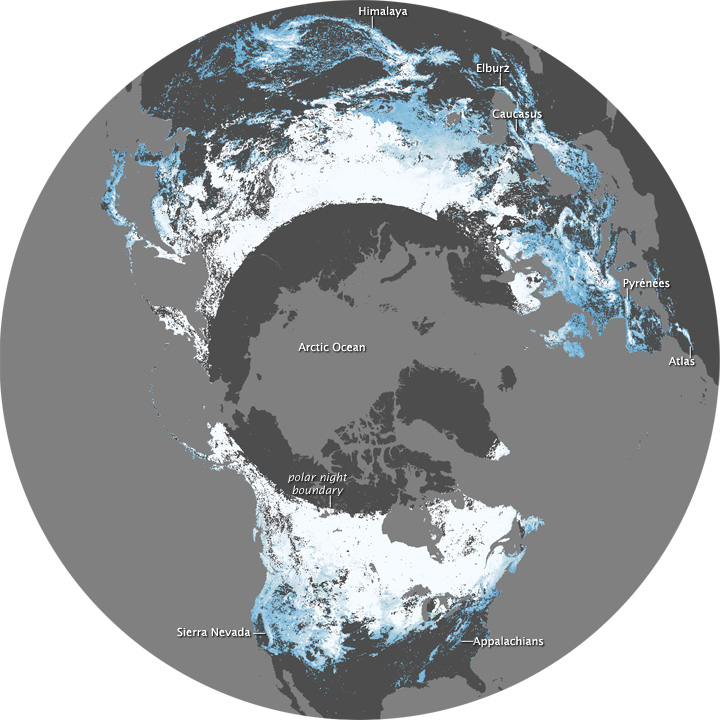 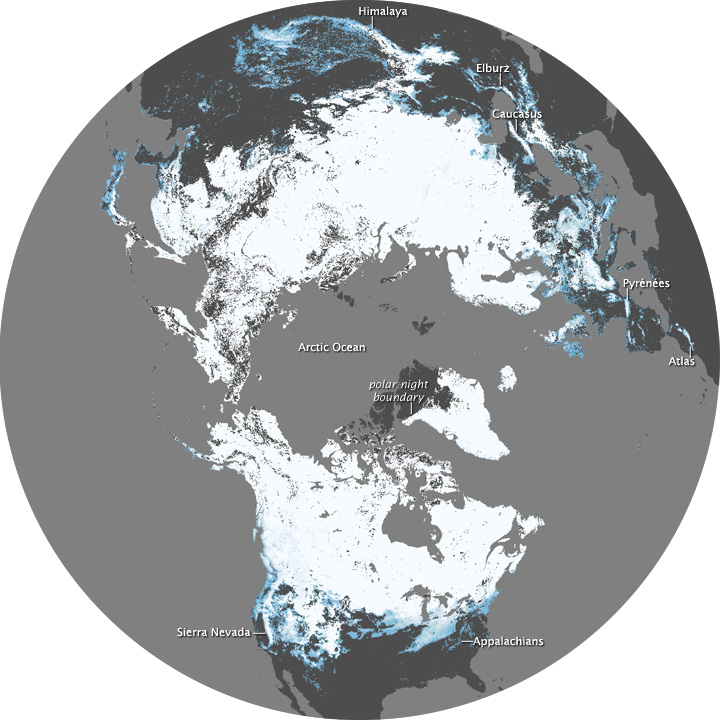 By astronomical standards, Northern Hemisphere winter won’t end until March 20. But for meteorologists, who sometimes divide the year up into seasons on the basis of similarity in weather and temperature, winter is already over. These maps show the average percent snow cover in the Northern Hemisphere for December 2008 (top) and February 2009 (bottom), the first and last months of meteorological winter. The maps are based on observations from the Moderate Resolution Imaging Spectroradiometer (MODIS) on NASA’s Terra satellite.

Very light blue shows places where at least a trace of snow was observed, while white shows where the ground was 100 percent snow covered. South of the polar night boundary, dark gray means either “no snow” or “no data,” usually because of clouds. Inside the polar night boundary, MODIS cannot observe snow cover because there is not enough daylight. The animation shows monthly snow cover from February 2000 through February 2009.

The snow cover maps reveal some of the winter’s significant snow events in the United States, including a rare snow fall in the Deep South that occurred in mid-December. The snow cover patterns also identify various topographic features, especially mountain ranges. In December, some of the Northern Hemisphere’s high mountain ranges already stood out from the surrounding terrain, including the Himalaya in Asia and the Atlas Mountains in northern Africa. Others were less distinct, such as the U.S. Sierra Nevadas, the Pyrénées of France and Spain, and the Caucasus of Eastern Europe, but by the end of winter, their peaks were crisply defined in white.

Global snow cover maps are valuable for both practical and scientific tasks. They can be combined with information on snow depth to help predict flood risk and water availability in regions such as Afghanistan, where the winter snow pack is the primary source of water in the summer. Because snow insulates the ground, it reduces the flow of heat and water vapor from the ground to the atmosphere, which influences weather and climate. Because snow is very bright, it increases the amount of sunlight a ground surface reflects back to space, which is a key part of the Earth’s energy budget and climate.

NASA maps and animation by Kevin Ward, based on data from the NASA Earth Observations (NEO) project. Caption by Rebecca Lindsey.