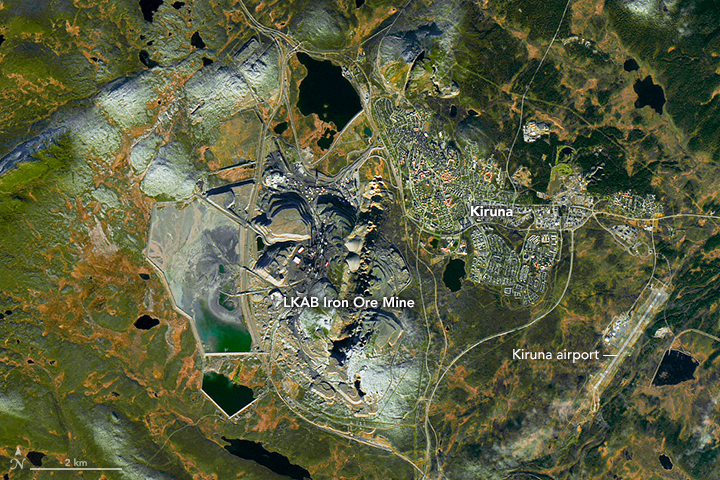 Kiruna, the largest underground iron ore mine in the world, has been in operation since 1900. But recent years have brought change for the residents of the nearby town. In coming decade, the 23,000 people and their homes and businesses will move three kilometers (nearly two miles) away.

Resource extraction is crucial for the town’s existence and economic wellbeing. But the steady development of mine shafts continues to weaken the ground there. In 2004, the mine’s operator, the Luossavaara-Kiirunavaara Company, announced that development of the mine has threatened the structural integrity of the town’s buildings. Some of them, including Kiruna’s historic red church, will be taken apart and reassembled at the new location.

The Operational Land Imager (OLI) on the Landsat 8 satellite captured this image of the Kiruna mine, town, and nearby airport on October 10, 2016. The green vegetation is marbled with yellow, likely the result of birch forests and deciduous shrubs changing color. A dusting of snow whitens some hilltops in the image. The Sun’s low angle on the southern horizon casts long shadows on the north sides of the hills.

The Kiruna orebody is one of the world’s largest magnetite-apatite deposits. Sweden, the biggest iron producer in Europe, owes its reserves to volcanic activity at least 1.8 billion years ago, according to a paper in Economic Geology.

This October Puzzler comes from the same OLI scene as this shot of fall colors in northern Sweden, located roughly 75 kilometers (50 miles) to the south. The Kiruna airport is the likely destination of the plane in the images above. 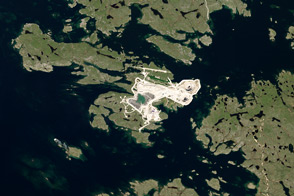 Diamonds in the Sub-Arctic Rough

Deep in Canada’s Northwest Territories, miners have carved out a living from an ancient kimberlite field.