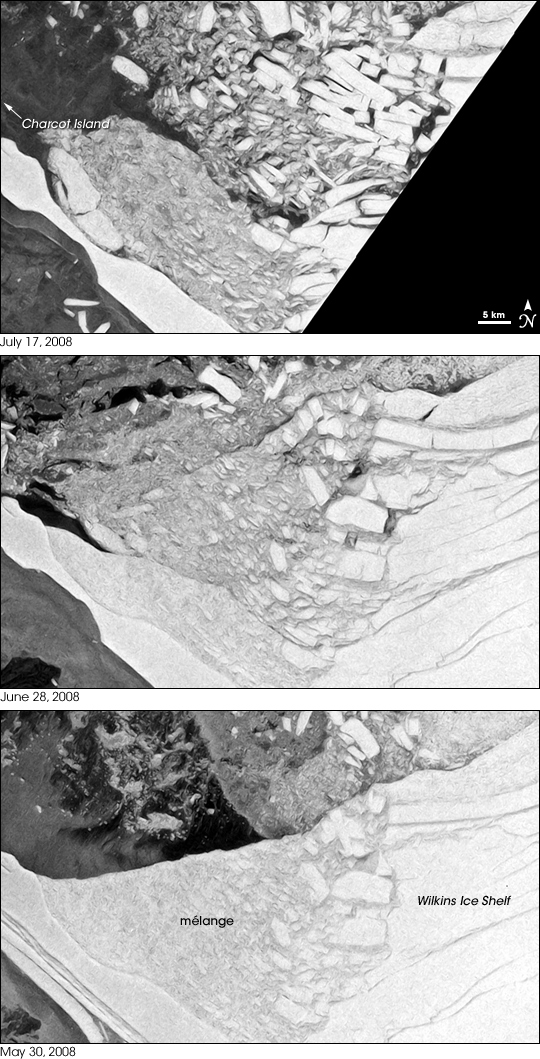 On the Antarctic Peninsula, the Wilkins Ice Shelf (roughly 70 degrees south and 75 degrees west) historically extended toward Charcot Island in the northwest and Latady Island in the southwest. By July 2008, the ice shelf’s connection to Charcot Island, which had helped to hold the shelf in place, was nearly gone.

The Advanced Synthetic Aperture Radar (ASAR) on the European Space Agency’s Envisat satellite observed the ice shelf between May 30 and July 17, 2008. These ASAR images show the eastern part of the ice shelf on July 17 (top), June 28 (middle), and May 30 (bottom). Not pictured, Charcot Island is in the northwest (upper left).

The image acquired on May 30, 2008, captured the ice shelf at the beginning of a disintegration event. In this image, large slices of the ice shelf appear in the lower left corner. These long, thin blocks have broken off the shelf and are moving away toward the southwest. To the northeast, in the middle of the image, is what glaciologists describe as mélange—a stuck-together mass of ice blocks, snow, and sea ice. This portion of the shelf actually disintegrated in 1998, but the ice remained frozen in place for a decade. Farther to the east, the ice is in larger blocks. To the north is a mixture of very thin sea ice, ice blocks from earlier rifting, and open water.

The image acquired on June 28, 2008, shows several changes. In the southwest, the large slices of ice visible on May 30 have moved away. The portion of the ice shelf connecting to Charcot Island has narrowed, assuming an almost hourglass shape. Immediately northeast of this skinny stretch of shelf, the darker parts of the ice mélange appear to be melting. Farther northeast, the large blocks of ice have begun to drift apart.

The image acquired on July 17, 2008, shows the continued breakup of the ice shelf. The ice mélange is even darker than it was in late June. Large, relatively intact plates of ice drift toward the northeast from the thin piece of shelf that still stretches toward the nearby island. The large blocks of ice in the northeast continue their northward drift, some separated by areas of open water.

These images focus on events in the eastern portion of the Wilkins Ice Shelf, The western portion of the shelf rapidly disintegrated between February 28 and March 6, 2008. That event had occurred during the Southern Hemisphere summer, when summertime warmth and sunshine can drive surface melt processes that lead to disintegration. In contrast, the events occurring from late May to early July 2008 occurred in the Southern Hemisphere winter. As of mid-July 2008, the exact mechanism of the winter breakup was uncertain, but warm ocean waters appear to have played a role. Previous cruises in the area had mapped warm ocean waters at depths of about 400 meters (1,300 feet) under the ice shelf. If this warmer water were somehow mixed with the upper waters, and brought into contact with the underside of the ice shelf, the warmer water may have caused basal melting of the ice.

Image by Jesse Allen based on data courtesy European Space Agency (ESA). The ESA provides an animation of the Wilkins disintegration and breakup. Caption by Michon Scott based on image interpretation by Ted Scambos, National Snow and Ice Data Center.