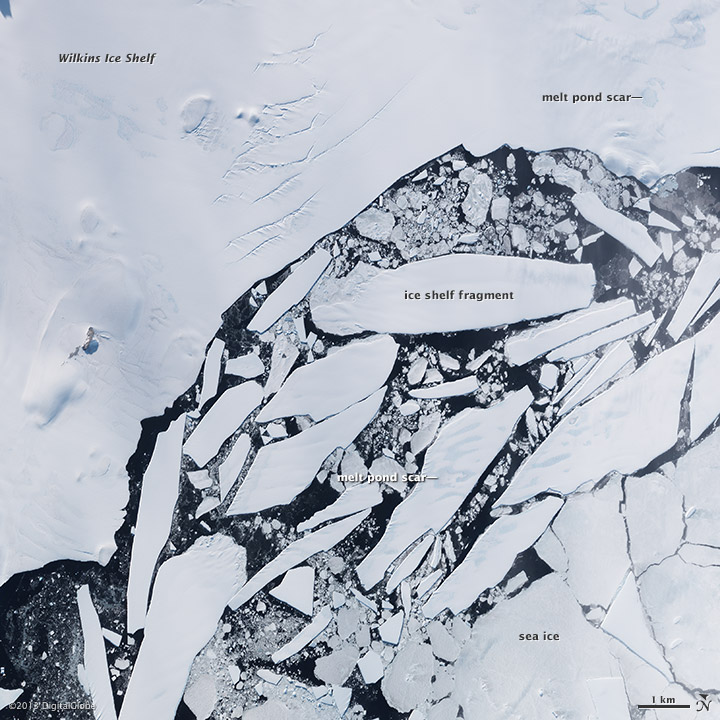 An ice shelf is a thick plate of ice attached to a coastline on one side and floating over the ocean on the other side. Many ice shelves fringe Antarctica, including the Wilkins Ice Shelf on the Antarctic Peninsula, which underwent a series of breakup events in 1998, 2008, and 2009.

Just as earthquakes can sometimes leave landscapes more prone to future quakes, the breakups on the Wilkins Ice Shelf left it vulnerable to further disintegration. In addition, the sea ice that had long pressed the shelf up against the coastline moved out, putting the remnants of the shelf in direct contact with open water. Ocean waves went to work on the ice, and in early 2013 the fracturing continued.

Acquired March 23, 2013, this high-resolution image from the WorldView-2 satellite shows a portion of the Wilkins Ice Shelf and a large assemblage of icebergs and sea ice just off the shelf front. (Image copyright 2013 DigitalGlobe, Inc.) Some of the iceberg surfaces give clues that they recently broke off from the shelf: many are somewhat lighter in color than the nearby sea ice, and some bear the same surface features as those seen on the shelf, including melt pond scars (which appear in pale blue). Melt pond scars are areas where meltwater once pooled on top of the ice and then refroze.

Ted Scambos of the National Snow and Ice Data Center has followed the effects of rising temperatures on the ice shelves of the Antarctic Peninsula, but he does not attribute this most recent breakup to global change. “I would not characterize this breakup as a direct result of climate warming, but rather an indirect result of the change in the shape of the shelf,” he states. “A breakup changes the stresses within the ice and will cause small retreats that reshape the shelf for several years. These retreats tend to happen when ocean waves can impinge directly on the shelf front.”

Clouds frequently obscure satellite views of the polar regions, so pinning down the precise date of this breakup event is difficult. Scambos suspects that the latest fragmentation of the Wilkins Ice Shelf occurred in mid-March 2013.