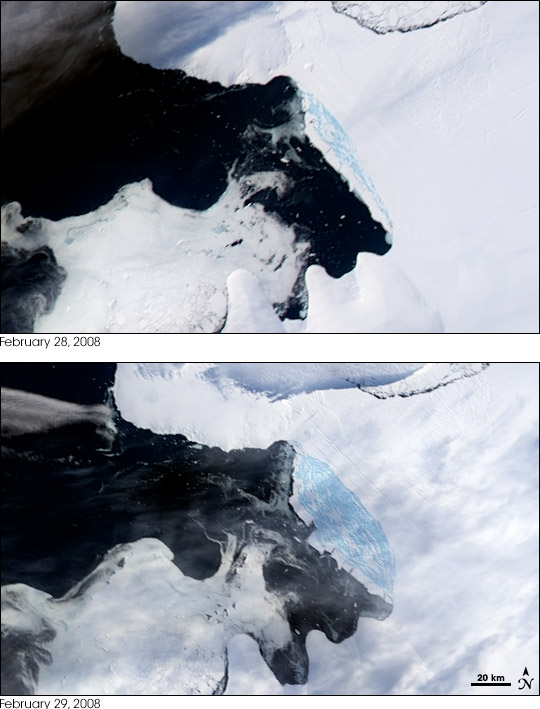 Ice shelves are thick slabs of ice that are attached to coastlines and extend out over the ocean. In the natural course of events, ice shelves often calve large icebergs. Beginning in the mid-1990s, however, some ice shelves began exhibiting a new behavior: rapid disintegration into small pieces, likely as the result of warming temperatures. On February 28, 2008, the Wilkins Ice Shelf on the Antarctic Peninsula exhibited such a phenomenon.

The disintegration of the Wilkins Ice Shelf was announced by the National Snow and Ice Data Center, the British Antarctic Survey, and the Earth Dynamic System Research Center at Taiwan’s National Cheng Kung. According to the institutions’ joint press release, an iceberg measuring 41 by 2.5 kilometers (25.5 by 1.5 miles) broke off from the Wilkins Ice Shelf on February 28, leading to uncontrolled disintegration. Separated by just under 16 hours, these MODIS images show the rapid rate of disintegration; the growing region of pale blue on the ice shelf is crumbling, water-saturated ice.

The Earth Observatory’s feature article Disintegration: Antarctic Warming Claims Another Ice Shelf has additional images and details about how and why ice shelves collapse and explains why the Wilkins Ice Shelf collapse is unlikely to raise sea level.

You can download a 250-meter-resolution KMZ file of the ice shelf disintegrating suitable for use with Google Earth.

NASA images by Jesse Allen and Robert Simmon, based on MODIS data. Caption by Michon Scott and Rebecca Lindsey.