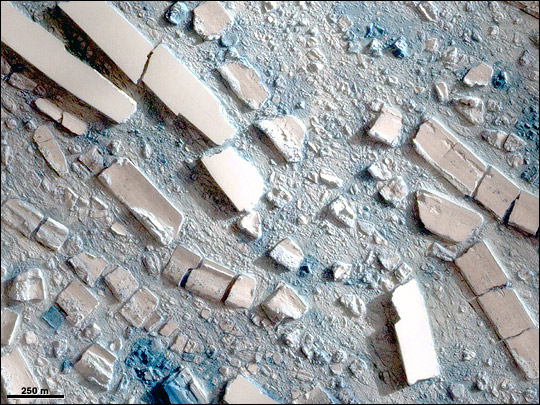 In late February 2008, an ice shelf on the Antarctic Peninsula disintegrated into a floating pile of massive ice bergs, smaller ice fragments, and slush that was trapped in place by freezing sea water over subsequent weeks. The dramatic event was first spotted in NASA satellite imagery by Ted Scambos, lead scientist at the National Snow and Ice Data Center. Over the following days, international collaborators used images from satellites and aircraft to track the event.

This highly detailed image from the Taiwanese Formosat-2 satellite shows the different sizes, shapes, and textures of the ice fragments on March 8, 2008. Several large icebergs float amid a mosaic of smaller pieces of ice. The level of detail in the image is so great that it can seem as though you are standing over a scale model made out of papier-mâché and foam blocks. The detail can make the bergs seem deceptively small. In reality, some of the large bergs are several hundred meters (yards) long.

Many of the large, table-like bergs have smooth, bright surfaces. These pieces simply broke off from the ice shelf and floated away. Their broad, flat shapes made them stable in the water, and the rise and fall of the ocean swells did not topple them. Other large pieces, however, tipped over like dominoes, making “topsides” out of surfaces that used to be on the side or the bottom of the shelf. These surfaces appear rougher, with ridges and pock marks. Many of them are also bluer, indicating they are waterlogged. The matrix of slushy-looking ice between the big bergs probably contains water-saturated fragments of the ice shelf (some of them still relatively large) along with newly forming sea ice.

The disintegration of the ice shelf is most likely the result of rising temperatures on the Antarctic Peninsula, which over the past fifty years has been one of the most rapidly warming places on the planet. When summertime temperatures become warm enough to melt ice on the surface of the shelf, the liquid water ponds on the surface. It can drive its way into existing cracks like a wedge splits firewood. Ocean swells jostle the weakening ice until it collapses. More imagery and details about the Wilkins Ice Shelf Collapse are available in the feature article Disintegration: Antarctic Warming Claims Another Ice Shelf.

This image was made from Formosat-2’s observations of near-infrared, red, and green light reflected by the icy surface. Using this combination of wavelengths as red, green, and blue in a digital image creates an image that is similar to natural-looking color, but enhances the color contrast across a landscape dominated by white.