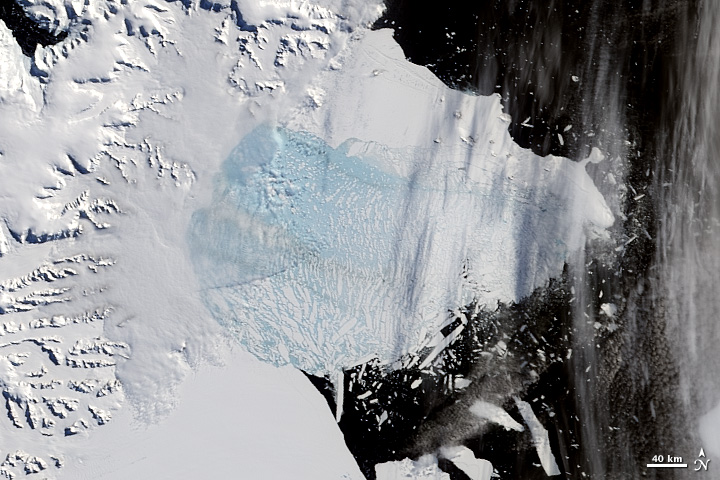 Moderate-resolution Imaging Spectroradiometer (MODIS) satellite imagery analyzed at the University of Colorado’s National Snow and Ice Data Center revealed that the northern section of the Larsen B ice shelf, a large floating ice mass on the eastern side of the Antarctic Peninsula, has shattered and separated from the continent. This particular image was taken on March 5, 2002. The shattered ice formed a plume of thousands of icebergs adrift in the Weddell Sea. A total of about 3,250 square kilometers of shelf area disintegrated in a 35-day period beginning on January 31, 2002. Over the last five years, the shelf has lost a total of 5,700 square kilometers and is now about 40 percent the size of its previous minimum stable extent.

Ice shelves are thick plates of ice, fed by glaciers, that float on the ocean around much of Antarctica. The Larsen B shelf was about 220 meters thick. Based on studies of ice flow and sediment thickness beneath the ice shelf, scientists believe that it existed for at least 400 years prior to this event and likely existed since the end of the last major glaciation 12,000 years ago.

For reference, the area lost in this most recent event dwarfs Rhode Island (2,717 square kilometers) in size. In terms of volume, the amount of ice released in this short time is 720 billion tons--enough ice for about 12 trillion 10-kilogram bags.

This is the largest single event in a series of retreats by ice shelves along the peninsula over the last 30 years. The retreats are attributed to a strong climate warming in the region. The rate of warming is approximately 0.5 degrees Celsius per decade, and the trend has been present since at least the late 1940s. Overall in the peninsula, the extent of seven ice shelves has declined by a total of about 13,500 square kilometers since 1974. This value excludes areas that would be expected to calve under stable conditions.

Ted Scambos, a researcher with the National Snow and Ice Data Center (NSIDC) at University of Colorado, and a team of collaborating investigators developed a theory of how the ice disintegrates. The theory is based on the presence of ponded melt water on the surface in late summer as the climate has warmed in the area. Meltwater acts to enhance fracturing of the shelf by filling smaller cracks. The weight of the meltwater forces the cracks through the thickness of the ice. The idea was suggested in model form by other researchers in the past (Weertman, 1973; Hughes, 1983); satellite images have provided substantial observational proof that it is in fact the main process responsible for the peninsula shelf disintegration. Christina Hulbe of Portland State University and Mark Fahnestock of University of Maryland collaborated with Scambos on the research.