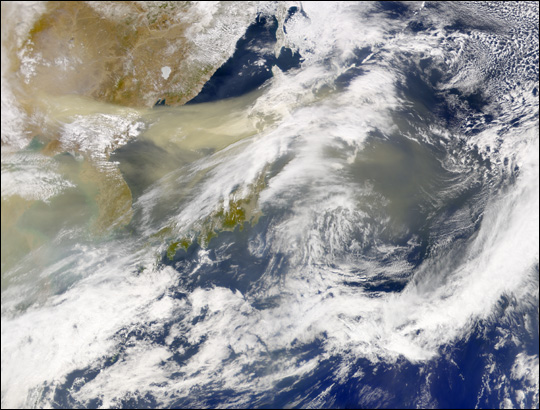 A few days earlier than usual, a large, dense plume of dust blew southward and eastward from the desert plains of Mongolia—quite smothering to the residents of Beijing. Citizens of northeastern China call this annual event the “shachenbao,” or “dust cloud tempest.” However, the tempest normally occurs during the spring time.

The dust storm hit Beijing on Friday night, March 15, and began coating everything with a fine, pale brown layer of grit. The region is quite dry; a problem some believe has been exacerbated by decades of deforestation. According to Chinese government estimates, roughly 1 million tons of desert dust and sand blow into Beijing each year.

This true-color image was made using two adjacent swaths (click to see the full image) of data from the Sea-viewing Wide Field-of-view Sensor (SeaWiFS), flying aboard the OrbView-2 satellite, on March 17, 2002. The massive dust storm (brownish pixels) can easily be distinguished from clouds (bright white pixels) as it blows across northern Japan and eastward toward the open Pacific Ocean. The black regions are gaps between SeaWiFS’ viewing swaths and represent areas where no data were collected.