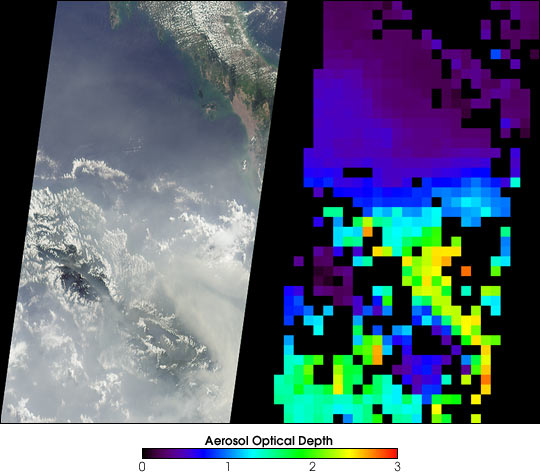 At least once a year for a period lasting from a week to several months, northern Sumatra is obscured by smoke and haze produced by agricultural burning and forest fires. These data products from the Multi-angle Imaging SpectroRadiometer (MISR) document the presence of airborne particulates on March 13, 2002. On the left is an image acquired by MISR’s 70-degree backward- viewing camera. On the right is a map of aerosol optical depth, a measure of the abundance of atmospheric particulates. This product utilized a test version of the MISR retrieval that incorporates an experimental set of aerosol mixtures. The haze has completely obscured northeastern Sumatra and part of the Strait of Malacca, which separates Sumatra and the Malaysian Peninsula. A northward gradient is apparent as the haze dissipates in the direction of the Malaysian landmass. Each panel covers an area of about 760 kilometers x 400 kilometers.

Haze conditions had posed a health concern during late February (when schools in some parts of North Sumatra were closed), and worsened considerably in the first two weeks of March. By mid-March, local meteorology officials asked residents of North Sumatra’s provincial capital, Medan, to minimize their outdoor activities and wear protective masks. Poor visibility at Medan airport forced a passenger plane to divert to Malaysia on March 14, and visibility reportedly ranged between 100 and 600 meters in some coastal towns southeast of Medan.

The number and severity of this year’s fires was exacerbated by dry weather conditions associated with the onset of a weak to moderate El Niño. The governments of Indonesia, Malaysia, and Brunei have agreed to ban open burning in plantation and forest areas. The enforcement of such fire bans, however, has proven to be an extremely challenging task.

Over the first two weeks of March, fires on Sumatra, Indonesia, bathed the island in a thick pall of smoke. The most recent MODIS and MISR images were acquired on March 13, 2002.