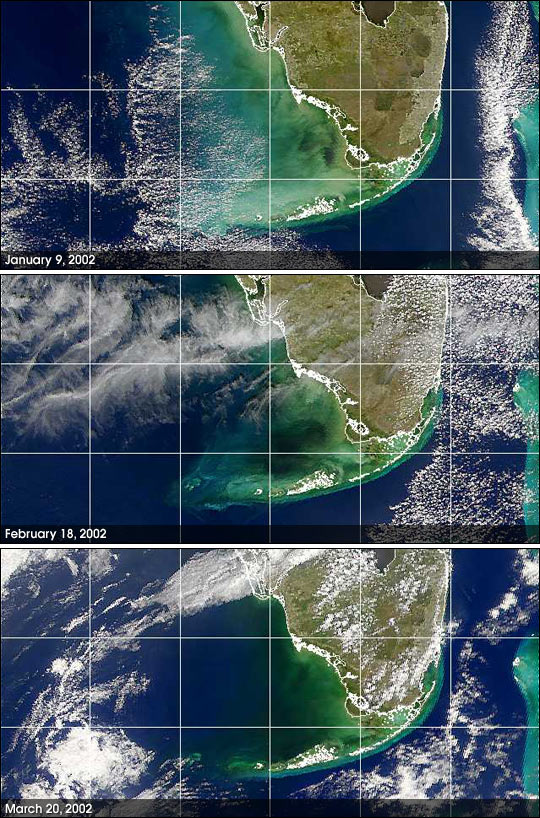 In mid-December last year, a mysterious black water overtook the normally bluish green waters of Florida Bay. Over the course of the winter, the extent of the water grew to encompass an area as big as Lake Okeechobee, Florida, before subsiding over the last few weeks. These images taken by the Sea-viewing Wide Field-of-View Sensor (SeaWiFS), flying aboard the Orbview-2 satellite, show the progression of the black water over the last three months. The affected water sits along the southeastern coast of Florida about fifty miles north of the Florida Keys.

As of now, scientists do not know why the water appears black in satellite and aerial images or whether the water is harming the wildlife. They speculate that it could be due to an exotic algae bloom, an underwater fountain pushing up sediments from the ocean floor, or possibly chemical and sediment run-off from the nearby Shark River. Researchers at the Florida Marine Research Institute in St. Petersburg and the Mote Marine Research Institute in Sarasota are running tests to determine the chemical make-up of the water.

No big fish kills have been reported in the area. But fishermen say the catch has been low this winter. In addition, the black water sits just north of the Florida Keys National Marine Sanctuary, which is home to one of the largest coral reef habitats in the United States. Toxic run-off from the Florida coastline and motor boats in the area have already destroyed many of Florida’s reefs. Scientists are concerned that if the extent of the black water grows again, it could endanger these reefs.

For up-to-date images of the area, view these SeaWiFS Images of Florida Bay.