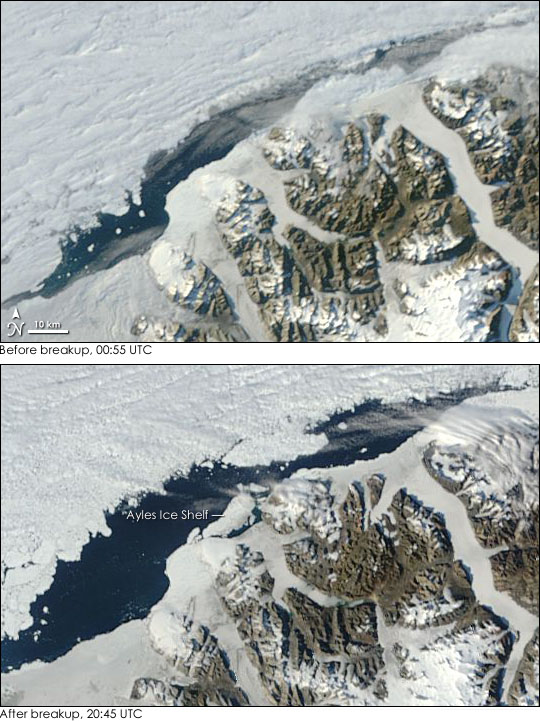 On August 13, 2005, the remote Ayles Ice Shelf on Ellesmere Island in northern Canada broke free and began drifting out to sea. The ice shelf was roughly 66 square kilometers (25 square miles), slightly larger than Manhattan, New York, or 11,000 football fields. According to The New York Times and the Canadian Broadcasting Corporation (CBC), the ice shelf broke free in less than an hour. Laurie Weir of the Canadian Ice Service first detected the ice shelf break when reviewing satellite images of the island.

The Moderate Resolution Imaging Spectroradiometer (MODIS) on NASA’s Terra satellite captured these images of the ice shelf on August 13, 2005. The top image shows the area before the ice shelf breakup, and the bottom image shows the area after the breakup. In the second image, the ice shelf has broken away from the island and is moving in a counter-clockwise direction out to sea. In the second image, the edge of the shelf still shows where it was connected to the island, but smaller pieces of ice also litter the water between the island and the newly broken-off shelf.

Unlike ice shelves in Antarctica and Greenland that are fed by massive glaciers, the Ayles Ice Shelf was comprised of compacted, thickened sea ice. Centuries of persistent winds blowing toward land had compressed the ice into a virtually permanent ice plate attached to the north coast of Ellesmere Island. The years 2002 through 2005 were unusually warm in the Arctic, and 2005 was marked by a strong decline in Arctic sea ice. Writing on his Website, Luke Copland, director of the University of Ottawa’s Laboratory for Cryospheric Research, said, “This [breakup] reduced the remaining ice shelves there from 6 to 5, and continues a trend of dramatic loss of these ice shelves over the past century. Since 1900, approximately 90% of the Ellesmere Island ice shelves have calved and floated away. This is a one-way process as there is insufficient new ice formation to replace the ice that has been lost. The Ayles calving event was the largest in at least the last 25 years....” In the The New York Times, Copland said that attributing the shelf collapse to human-caused global warming would be premature, although the shelf’s quick demise was a sign that warming temperatures are producing rapid changes in the Arctic.

On August 13, 2005, the Ayles Ice Shelf on Ellesmere Island in northern Canada broke away from the island and floated out to sea. According to news reports, the break took less than an hour, and Luke Copland, director of the University of Ottawa’s Laboratory for Cryospheric Research, described the break as evidence of the Arctic’s rapid response to warming temperatures. The Advanced Spaceborne Thermal Emission and Reflection Radiometer (ASTER) on NASA’s Terra satellite observed the area before and after the ice shelf breakup.