(MODIS) on NASA’s Terra satellite shows the rapid break up of the Serson Ice Shelf between July 28 and July 31."> 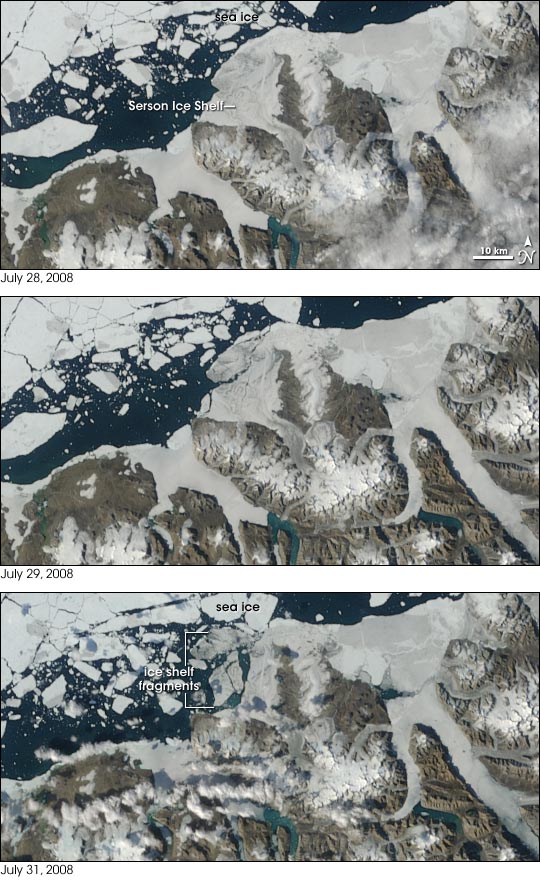 As recently as the early 1900s, the northern coast of Canada’s Ellesmere Island was fringed by a continuous expanse of ice. By July 2008, warming Arctic climate had reduced the continuous ice to five isolated shelves. In July and August three of the remaining five shelves, which scientists believe had been in place at least 4,500 years, experienced further significant retreat.

This trio of images from the Moderate Resolution Imaging Spectroradiometer (MODIS) on NASA’s Terra satellite shows the rapid break up of the Serson Ice Shelf between July 28 and July 31. Loosely packed sea ice occupies the image at top center and upper left. The grayish-white ice of the Serson Ice Shelf is near the center of the images. Between July 28 (top) and 29 (middle), two large chunks of the shelf broke off: one in the north and a smaller piece in the west. Two days later (bottom), the entire western half of the shelf was in pieces.

In terms of total area, the Serson collapse was the largest ice loss on Ellesmere this summer. About 122 square kilometers (47 square miles, an area roughly twice the size of Manhattan Island) broke away from the shelf. The collapse reduced the ice shelf by 60 percent. (In terms of percent loss, the top rank goes to the smaller Markham Ice Shelf, to the east; the 50-square-kilometer shelf completely disappeared.)

Many ice shelves are fed exclusively by land-based glaciers, but the Serson Ice Shelf is composed of glacier ice, as well as sea ice and snow that have accumulated over millennia. Arctic sea ice retreat in recent years likely played a role in ice shelf retreats along the Ellesmere coast this summer. Without sea ice packed up against the Ellesmere shoreline, wind and waves batter the ice shelves, and sunlight-warmed ocean waters may circulate beneath the shelves, melting the bottoms. Rising air temperatures over land, especially during the winter, likely contributed as well.

Between July and August 2008, the Serson and Ward Hunt Ice Shelves lost ice, and the Markham Ice Shelf disintegrated completely.