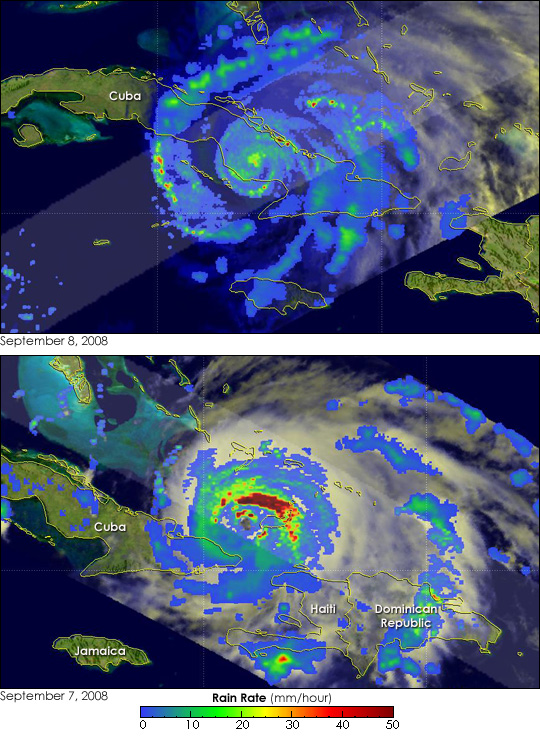 As Hurricane Ike battered Cuba on September 8, 2008, the rugged island punched back. These two images illustrate just how much Ike changed as it moved across Cuba. Captured by the Tropical Rainfall Measuring Mission (TRMM) satellite, the images show rainfall within the storm. Rings of heavy rain, shown in dark red, partly circled a distinct eye on September 7. The rainfall, from TRMM’s Precipitation Radar, is overlaid on an image made from visible and infrared data. At the time the image was taken (2:34 p.m. EDT), Ike was an extremely dangerous Category 4 hurricane with sustained winds near 215 kilometers per hour (135 miles per hour), said the National Hurricane Center. The image illustrates that Ike also packed extremely intense rains.

TRMM captured the top image on September 8 at 7:02 a.m. EDT. The low morning light was insufficient for the satellite to see the cloud structure, which is dark in this image, but the rainfall is clear. While there were a few spots of heavy rain, the rainfall had decreased dramatically. For the bulk of the storm, the rain rate had dropped to under 10 millimeters per hour. No distinct eye was visible in the rain field. In their advisory issued at 8:00 a.m. EDT, the National Hurricane Center estimated Ike’s winds to be near 155 km/hr (100 mph), making it a Category 2 storm.

Ike emerged over the Gulf of Mexico on the afternoon of September 9 as a Category 1 hurricane. It was expected to re-intensify, possibly into a major hurricane, over warm Gulf waters as it moved towards Texas.

TRMM is a joint mission between NASA and the Japanese Space Agency, JAXA.

As Hurricane Ike battered Cuba on September 8, 2008, the rugged island punched back. Rainfall rates dropped dramatically as the storm crossed the island, losing power from a Category 4 to Category 2 hurricane.