Both Routes Around Arctic Open at Summer’s End 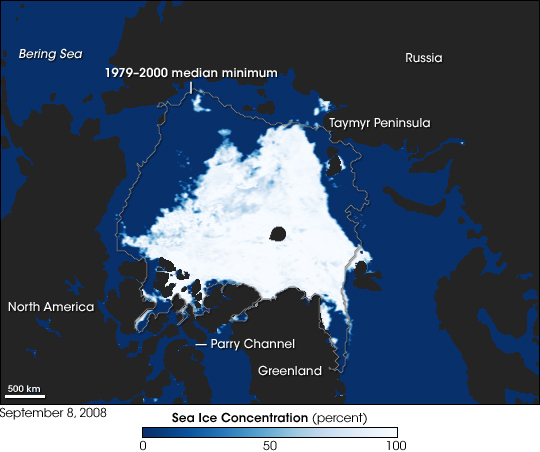 As of the first week of September 2008, Arctic sea ice extent had not fallen below the record low observed in 2007, but the season set a new kind of record. For the first time in probably half a century—and definitely since satellite observations began about three decades ago— sea ice retreated enough to create open (not ice-free) waters all the way around the northern ice pack. Open water is defined by the World Meteorological Organization for the purposes of navigation as areas where the ice covers less than one-tenth of the surface.

This image shows Arctic sea ice concentration on September 8, 2008, as observed by the Advanced Microwave Scanning Radiometer–Earth Observing System (AMSR-E) sensor on NASA’s Aqua satellite. The observations are collected on a pixel by pixel basis over the Arctic. The percentage of a 12.5-square-kilometer pixel covered by ice is shown in shades of dark blue (no ice) to white (100 percent ice). The gray line around the Arctic basin shows the median minimum extent of sea ice from 1979-2000. (The median of a data set is the middle value if you arrange the numbers in order from smallest to largest.)

The southern portions of the Northwest Passage through the Arctic (the western route from Europe to Asia through the islands of northern Canada) opened in early August. Then in early September, ice scientists confirmed that the waters around the Russian coastline—the Northern Sea Route— were navigable, but still treacherous, with shifting floes of thick, multi-year ice, that could coalesce rapidly. The image shows that the widest avenue through the Northwest Passage, Parry Channel, still harbored some ice, but the more circuitous, southern waterways were clear. On the other side of the Arctic Ocean, the passage around Russia’s Taymyr Peninsula, normally locked in by ice, was similarly open. According to a press release from the U.S. National Ice Center, “This is the first recorded occurrence of the Northwest Passage and Northern Sea Route both being open at the same time.”

The arrival of Northern Hemisphere autumn signals the end of the seasonal retreat of Arctic sea ice. Polar scientists from the National Snow and Ice Data Center report that sea ice appeared to hit its lowest extent on September 14, 2008, when the area at least 15 percent covered by ice dropped to 4.52 million square kilometers (1.74 million square miles).