Breaks in Ice on the Volga River 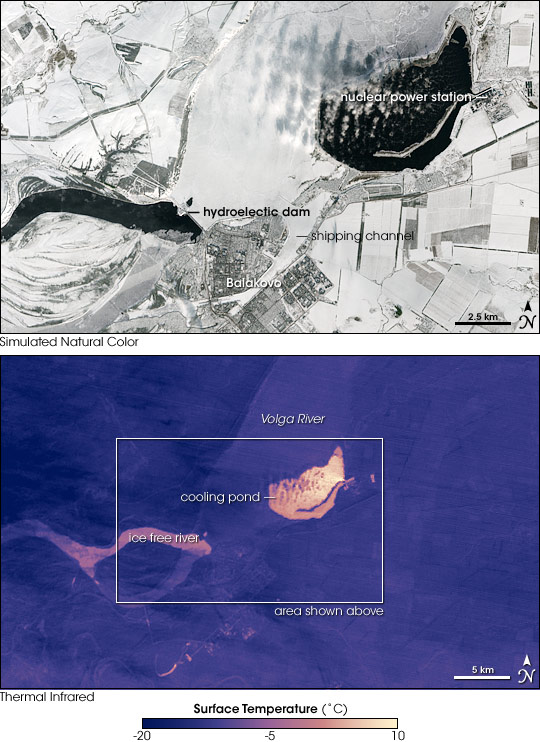 With most of the country located at high northern latitudes, far from the temperature-moderating influence of oceans, much of Russia experiences bitterly cold winters. Wintertime temperatures are usually cold enough to freeze rivers and lakes with ice crusts that are thick enough to walk and even drive on. In this image of the ice-bound Volga River in southern Russia, however, two major ice-free areas contrast sharply with the surrounding wintry landscape. These dark blue areas of open water result from different technologies, but they have a common cause: generating electricity.

This image of the Balakovo Nuclear Power Station and the Saratov Hydroelectric Power Station was captured by the Advanced Spaceborne Thermal Emission and Reflection Radiometer (ASTER) on NASA’s Terra satellite on January 29, 2004. The top, photo-like image is almost all white: the fields surrounding the city of Balakovo are snow-covered, the Volga River is ice-covered, and small puffs of clouds hang over the Balakovo Nuclear Power Plant cooling pond. The cooling pond and the stretch of open water downriver of the dam at the Saratov Hydroelectric Station are the only places free of winter’s grip.

The bottom image shows surface temperatures that ASTER observed. Both of the ice-free areas are warmer than the rest of the ice-bound river, but the area downstream of the dam is chillier than the water in the nuclear plant cooling pond. Just below the dam, the water is just barely above freezing (pink). Farther downriver, the water appears to be cold enough to freeze (blue), but turbulence from the flow of water over the dam prevents it from icing over. In the cooling pond, the temperatures are nearly 10 degrees Celsius in places. The water in the pond is not radioactive; it is part of a secondary “closed” cooling loop for the reactor. The water temperature in this cooling pond varies with the seasons and power demands, but usually is lukewarm and well above freezing even in the depth of winter.

The 40-meter- (131-foot-) high dam at Balakovo holds back the Saratov Reservoir, which extends upriver more than 350 kilometers (217 miles). In addition to generating electricity, the reservoir provides irrigation water in the Saratov Oblast (province), one of the major agricultural areas in Russia. Near the bottom of the image, the city of Balakovo is divided by a shipping channel that separates the newer island section of the city from the older city center. Though the city predates the creation of the hydroelectric power station, it grew tremendously with the arrival of engineers and construction experts in the 1960s.

You can download a 15-meter-resolution KMZ file comparing simulated natural color and thermal imagery (90-meter resolution) of the Saratov Hydroelectric Station and Balakovo Nuclear Power Plant suitable for use with Google Earth.

This image of the Balakovo Nuclear Power Station and the Saratov Hydroelectric Power Station was captured by ASTER on January 29, 2004. Small puffs of clouds hang over the Balakovo Nuclear Power Plant cooling pond. The cooling pond and the stretch of open water downriver of the dam at the Saratov Hydroelectric Station are the only places free of winter’s grip.

Snow and ice serve to accent human activities in this photograph taken by the Space Shuttle mission STS-98 crewmembers on February 17, 2001. The Souris River stretches across the photograph from left to right, with the upstream Rafferty Dam Reservoir frozen over on the far left. Two power plants, the Boundary Dam Power Station and the Shand Power Station, can be identified by the smoke plumes and shadows of those plumes. The river is frozen over upstream of the Boundary Dam Power Station, but thermal loading from the plants has warmed the water in the Boundary Dam Reservoir so that it remains nearly ice free. Downstream of the reservoirs, thermal loading is sufficient to maintain open flow in the Souris River.