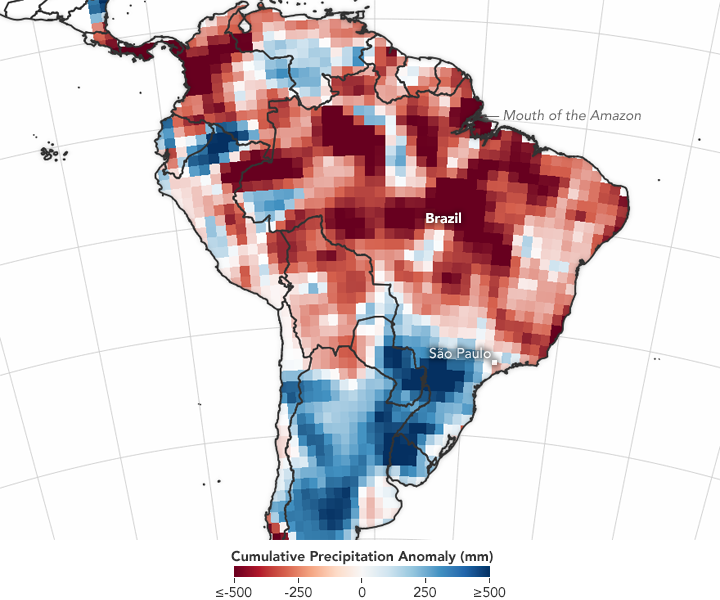 Even before the 2016 dry season started in South America, a marked deficit in rainfall was apparent across much of the continent. Parts of the Amazon, for example, were already far drier than in 2005 and 2010, the last serious drought years. Now, as the wet season approaches, intense drought still runs deep across the Amazon basin and much of Brazil.

The map above shows the accumulated deficit in rainfall flowing into surface and groundwater storage as of October 2016. The data were compiled by the Global Precipitation Climatology Centre, which analyzes precipitation data collected from rain gauges. Red areas show the level of the rainfall deficit compared to the norm for October, while blue areas had more than usual amounts of rainfall.

Some areas fared better than others. For example, Brazil’s largest city, São Paulo, is located between areas that were anomalously dry (to the north) and others that were anomalously wet (south). The city has reportedly received sufficient rain since late 2015 to begin raising the water level in its main reservoir system.

But as the map also shows, rainfall elsewhere in Brazil and the Amazon was far below normal for October. It remains to be seen whether the rainfall associated with the wet season can break the ongoing drought.

“In Brazil, the rainy season is the austral summer, from December to March,” said Augusto Getirana, a hydrologist and remote sensing scientist at NASA’s Goddard Space Flight Center. “It’s hard to tell if this summer will be the same, but considering the pattern of previous years, my guess would be a yes.”

Getirana knows well the patters of recent years. In February 2016, he published a satellite-based study showing that southeastern Brazil lost 6.1 centimeters of water per year from 2012 to 2015. That may not sound like much, but in terms of volume over the entire area, that’s 56 trillion liters of water.