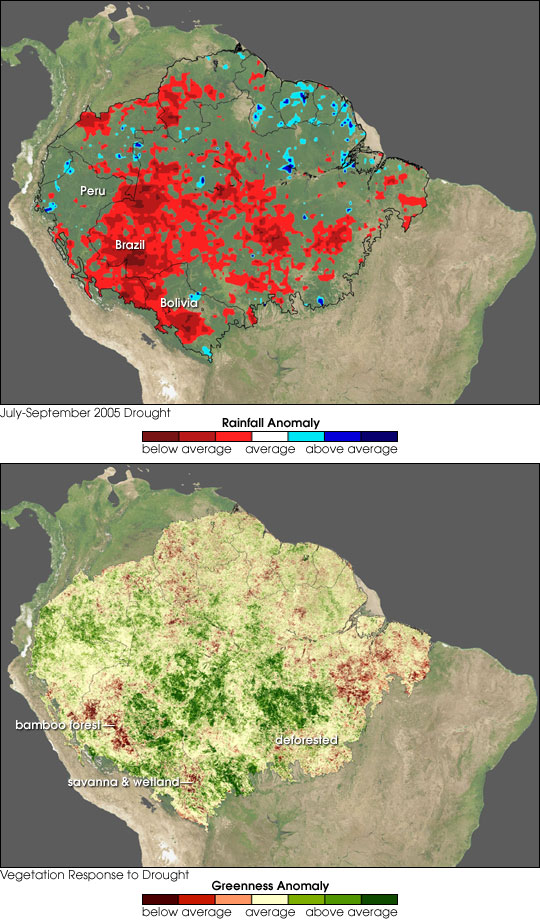 Deprive a tree of water, and you might expect it to react like a manufacturing operation that suddenly finds its income cut off. It might shed a few leaves as it shuts down some of the factories that convert light, carbon dioxide, and water into food. You might expect it to slow down its exhaling of water into the atmosphere in guarded self-defense. That’s what you would expect. The trees in the Amazon, however, apparently run on a different business model.

In 2005, widespread drought settled over the Amazon. The severity and extensiveness of the drought are illustrated in this rainfall anomaly image (top). The image is based on measurements taken by the Tropical Rainfall Measuring Mission (TRMM) satellite between July and September 2005. Regions that received far less rain than average are red, and spots of greater-than-average rainfall are blue. While the drought spread over much of the Amazon basin, the worst conditions were in the southwest, where Brazil, Peru, and Bolivia meet.

The drought peaked between July and September, the “dry” season, when rainfall over much of the area is naturally lower than at other times of the year. This dual deprivation of rain plunged the forest into extremely dry conditions. If the trees were going to react negatively to their change in fortune, it would be during just such an extreme, thought Scott Saleska, Kamel Didan, and Alfredo Huete, at the University of Arizona, and Humberto da Rocha at the University of São Paulo (Brazil). The group monitored changes in the Amazon through a vegetation “greenness” index based on observations from the Moderate Resolution Imaging Spectroradiometer (MODIS) on NASA’s Terra satellite. Greenness is a general indicator of the area, density, and leafiness of vegetation; high greenness indicates more photosynthesis. By comparing vegetation index measurements taken during the drought to the average of measurements taken during normal years, the group hoped to uncover just how the forest responded to the unusually dry conditions.

The lower image reveals the change in photosynthesis during the drought. Areas where more photosynthesis occurred than average are green, while places where vegetation growth slowed down are brown. As the overall green tone of the image reveals, the heart of the Amazon rainforest thrived in the drought. Why? It appears that the trees in the intact forests have deep root systems that can tap into a reserve of ground water stored up during the rainy season. During the drought, the skies over the forest were clear, allowing sunlight to reach the trees unfiltered by clouds. The boon in sunlight combined with access to deep ground water allowed the trees to be more productive than they were in other, rainier years.

This pattern does not hold true throughout the entire region. Shallow-rooted bamboo trees dominate the forest in far western Brazil, and these trees slowed their growth considerably when the rain failed. The savannas and wetlands of central Bolivia dried out, as did deforested areas in southern Brazil. Each of these vegetation regions rely on consistent rainfall.

Understanding how the Amazon reacts to drought is important because scientists want to know what will happen if global warming shifts rainfall patterns. When building models to understand the complicated relationship between earth and sky, scientists have assumed that forests respond to decreased rainfall by slowing photosynthesis and reducing the amount of water they release into the atmosphere.

Such a response would protect the trees for a time, but it can actually deepen or prolong the drought because it deprives the atmosphere of potential drought-breaking moisture. According to many models, this downward spiral has the potential to kill off the forest, given enough time, converting it to savanna. However, as these results show, the Amazon might be more resistant to drought, at least in the short term, than some models predict. The new research, published in Science Express on September 20, 2007, confirms previous work in which Saleska and his colleagues showed that the Amazon forest is greener in the dry season than during the wet season.