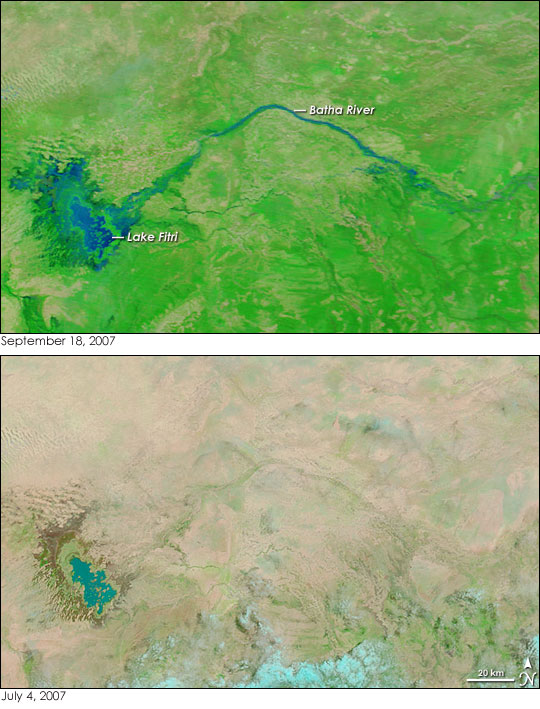 The Sahel grassland is a rain-dependent ecosystem. With no mountain snowpacks to provide water during the dry season or daily infusions of water from moist air masses, the fortunes of the great African grasslands depend entirely on seasonal rain. The contrast between the dry season and the rainy season is illustrated by this pair of images, both captured by the Moderate Resolution Imaging Spectroradiometer (MODIS) on NASA’s Terra satellite. MODIS took the top image on September 18, 2007, after weeks of unusually heavy rain had fallen over the Sahel. At the time, as many as 17 countries were flooded, from Senegal, bordering on the Atlantic Ocean in the west, to Kenya on the continent’s east coast.

The lower image was taken on July 4, 4007, a short time before the rains started in earnest. The images show Lake Firtri and the Batha River in southern Chad, a short distance east of Lake Chad. In the combination of infrared and visible light used to create these images, water is typically black, though in this case, it is bright blue. Sediment in the water scatters light, creating the blue color. In July, the only visible water is in Lake Fitri. Traces of green vegetation in the wetlands around the lake and along the Batha River are the only indication that water might be present elsewhere in the scene. Beyond these green areas, the landscape around the lake is mostly the rosy tan of barren land. The cluster of waves in the land to the north of Lake Fitri is likely a dune field along the southernmost edge of the Sahara Desert. Clouds, turquoise blue in this false-color image, gather on the southern edge of the scene.

By September 18, water had changed southern Chad completely. The region went from dry to flooded. Lake Fitri had nearly doubled in size as the wetlands filled with water. The Batha River ran high, its channel clearly defined by a bold blue line of water. The land is vibrant green, covered with the grasses that sprang up in response to the rains. The rains and resulting floods cut off or severely hampered access to refugee camps along Chad’s southeastern border with the Darfur region of Sudan, making the delivery of supplies difficult, said the United Nations Office for the Coordination of Humanitarian Affairs in a report issued on September 20. The rains were expected to continue through early October.

Chad was just one of many African countries that were flooded in September 2007. As many as 17 countries and more than a million people were affected by flooding across Africa, reported BBC News on September 17. Images of flood areas in Nigeria, Ghana, Senegal, Mali, Uganda, and Sudan are available on the Earth Observatory. Daily images of Africa’s Sahel region, where the floods were concentrated, are available from the MODIS Rapid Response System.