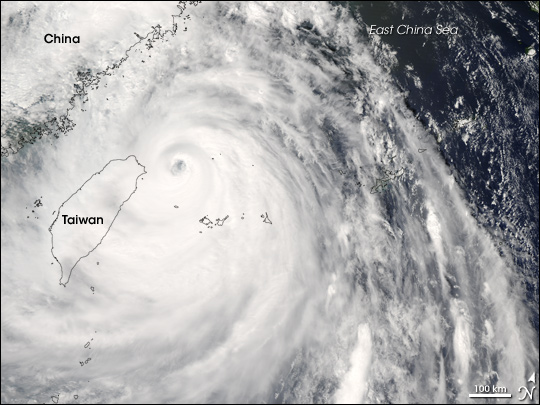 Super Typhoon Wipha was approaching the coast of China on the afternoon of September 18, 2007, when the Moderate Resolution Imaging Spectroradiometer (MODIS) on NASA’s Aqua satellite captured this photo-like image. At the time (12:40 p.m. local time, 4:40 UTC), Wipha had winds between 250 kilometers per hour (155 miles per hour or 135 knots) and 240 km/hr (150 mph or 130 knots), making it a strong Category 4 storm and a Super Typhoon (a typhoon with winds of at least 130 knots). The storm weakened shortly after this image was taken and was forecast to weaken further before making landfall over the densely populated East China coast late on September 18 or early on September 19.

Though the storm was weakening, it was anticipated to be the strongest storm to hit China in a decade, reported Xinhua, China’s news agency. In preparation for the storm, the government evacuated about two million people in three provinces, said Xinhua. The storm had already started to soak Taiwan with heavy rains by the time this image was taken. The spiraling bands of rain clouds cover the island in this image, though the dark, well-defined eye remains offshore to the north. The image also reveals just how large Wipha was. Including its outer bands, which stretch from the Philippines (visible in the large image) in the south to the East China coast in the north, Wipha sprawls over several hundred kilometers.

Super Typhoon Wipha was approaching the coast of China on the afternoon of September 18, 2007. At that time, Wipha had winds between 240 and 250 kilometers per hour, making it a strong Category 4 storm and a Super Typhoon (a typhoon with winds of at least 130 knots).

Super Typhoon Wipha was a powerful Category 4 typhoon when it approached the densely populated East China coast on September 18, 2007.

Typhoon Neoguri was nearing its peak strength on April 17, 2008, when the Moderate Resolution Imaging Spectroradiometer (MODIS) on NASA’s Aqua satellite captured this image at 1:30 p.m. local time (05:50 UTC). The first typhoon of the 2008 season in the western Pacific, Neoguri was a relatively weak Category 2 storm.