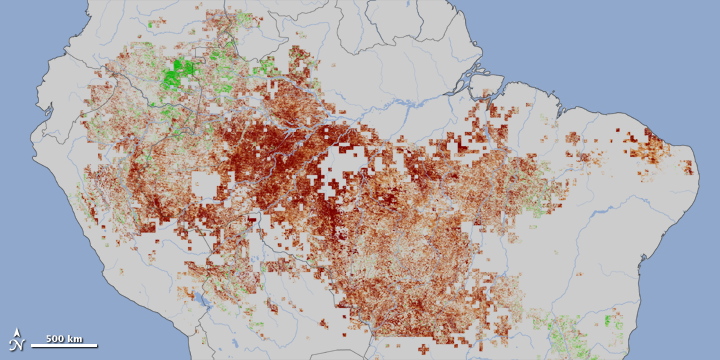 How does drought affect a rainforest? The deep-rooted trees that make up the various forests in the Amazon may be somewhat resistant to drought. Scientists have noticed that the trees actually sprout more leaves during the dry season. But drought is more extreme than the seasonal dry cycles, and in 2005, drought reduced growth and killed trees in carefully monitored patches of the Amazon. With these conflicting results, how drought affects the forest on a large scale is an open scientific question. 2010 gave scientists another chance to investigate.

Between July and September 2010, severe drought gripped the Amazon Basin. The Negro River, a tributary of the Amazon, reached its lowest level in 109 years of record-keeping, and uncontrolled fires spread a pall of smoke over the drying basin. But how did the drought affect the trees?

This image shows a possible answer. Made with vegetation “greenness” measurements from the Moderate Resolution Imaging Spectroradiometer (MODIS) on NASA’s Terra satellite, the image shows vegetation conditions between July and September 2010 compared to average conditions for the same period between 2000 and 2009 (except for 2005, another drought year). The vegetation indices are measurements of the how much photosynthesis could be happening based on how much leafy vegetation the satellite sees. In 2010, the vegetation index recorded lower values than in previous years, an indication that trees under drought stress either produced fewer leaves or the chlorophyll content of leaves was lower, or both.

The measurement of vegetation over tropical forests can be tricky. The vegetation index is made by combining the visible and infrared red light the plants reflect back to space. The dense, lush foilage in tropical forests absorbs most visible light, so little visible light makes it back to the satellite, making it more difficult to calculate the vegetation index than in other ecosystems. At the same time, smoke reflects visible light. When there is smoke in the atmosphere during the dry season, the extra reflected light can make it appear that the forest is less healthy than it is. During drought years, smoke can be more of a problem, since fire is more common in the dry conditions and the Amazon can be cloaked in near perpetual smoke.

To get around the problem, MODIS also measures aerosols and clouds that could interfere with the vegetation measurement. In the case of this image, the scientists analyzed each scene for haze and clouds, and discarded the ones that were too contaminated. In the remaining measurements, the team concluded that 1.68 million square kilometers of forest showed signs of drought stress or a decline in photosynthesis. Another analysis based on rainfall measurements also concluded that trees declined significantly during the 2010 drought.

Such a decline could have a far-reaching impact. Tropical forests, particularly the Amazon, are one of Earth’s great storage basins for carbon. The forests remove carbon dioxide from the atmosphere and turn it into plant matter. If some of the tropical forests dry out under a changing climate, they release the carbon stored in the rotting wood of dead trees into the atmosphere where it can contribute to even more warming. Scientists are keen to figure out what happens to tropical forests in dry conditions now so that they can predict what will happen to the forest in a different climate, when rainforest droughts are predicted to be more common.