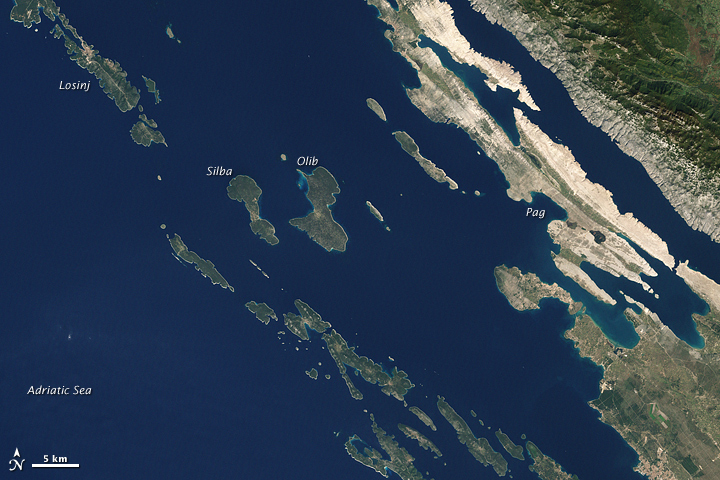 Along the coast of Croatia lies a multitude of islands of varying shapes and sizes. Archaeological finds indicate that some of the islands have been inhabited since the Stone Age and have supported trade routes since the sixth century BC. Increasingly popular as tourist destinations now, the islands rest atop a collision zone of tectonic plates. The tectonic activity contributes to the continuing growth of the islands.

The Enhanced Thematic Mapper Plus (ETM+) on NASA’s Landsat 7satellite captured this natural-color image on October 2, 2002. This picture shows some of the Croatian Islands in the Adriatic Sea.

One of the larger Dalmatian Islands is Pag. Running mostly northwest to southeast, the island has an uneven coastline and sharply contrasting land surfaces. Rocky ground covers most of Pag, but macchia—Mediterranean shrubland—dominates in some areas. The island receives enough moisture to grow fruits and vegetables, and local residents produce wine and olive oil.

West of Pag are the small, low-lying islands of Silba and Olib. Both have less complicated coastlines and fairly even carpets of vegetation. In the northwest, the island of Losinj (part of the Cres-Losinj archipelago) enjoys a mild climate and evergreen vegetation. Although the island’s coast is steep and rocky in the west, the coastline is flatter in the east.

Geologists long thought the islands off Croatia’s coast had stopped growing between 20 and 30 million years ago, but a 2008 study identified an active fault under the Adriatic Sea. Running along the Croatian coastline, the fault occurs where the South Adria Microplate (a former piece of the Africa Plate) is subducting below the Eurasia Plate. As a result of the plate collision, the Italian Peninsula is creeping toward the Croatian coast at roughly 4 millimeters (0.16 inches) per year, and the Dalmatian Islands and Dinaride Mountains are slowly rising.