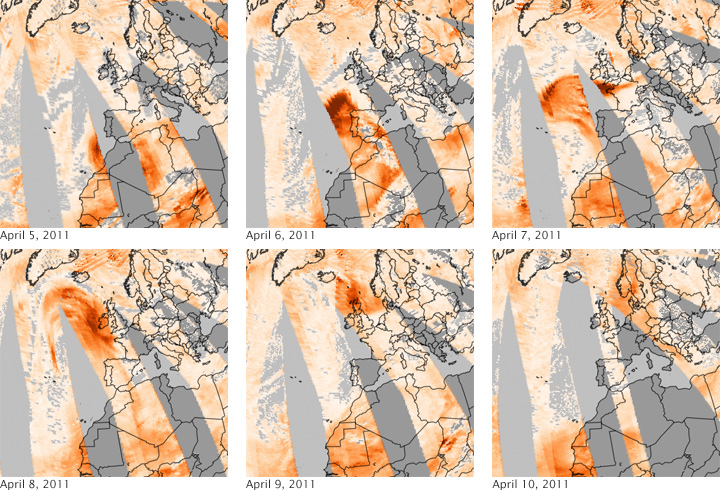 Atmospheric scientists track aerosols—tiny solid and liquid particles suspended in our atmosphere—because they have important impacts on weather, climate, and human health. Mineral dust is one of the most abundant aerosols, a product of winds blowing across our deserts and beaches, picking up tiny bits of rock and sand and distributing them all over the world. Dust can fertilize the ocean for plankton and seed the sky for cloud formation.

Sometimes dust storms are just cool to watch, as well. In this series of images from the Ozone Monitoring Instrument (OMI) on NASA’s Aura satellite, the dust from a Saharan sand storm blows several thousand kilometers over the North Atlantic and Europe in April 2011. Aerosol concentrations in the air are represented by a quantity known as the aerosol index, with the highest concentrations in deep red and the lowest in light yellow. The gray areas represent clouds or areas where no reliable OMI data were available.

The aerosol index is calculated based on how particles absorb and scatter light. Specifically, the index is a measurement of the difference between the amount of ultraviolet (UV) light the dust-filled atmosphere scatters back to the satellite compared to the amount of UV the atmosphere would scatter back if skies were totally clear.

OMI spied the Saharan dust on April 5, 2011, as it was blowing over Morocco and Algeria (top left image). By the next day (top middle), the plume drifted north past the coast of Portugal; the Moderate Resolution Imaging Spectroradiometer (MODIS) on NASA’s Terra satellite captured this natural-color view of the event, as well. The storm veers west, then north and east on April 7 –9, before arriving over Scandinavia on April 10 (bottom right).

Though Saharan dust blows through Europe several times a year, “the scale of this cloud and the amount of dust is somewhat unusual, including the amount of dust transported to the northern and eastern parts of Europe,” said atmospheric scientist Colin Seftor, based at NASA's Goddard Space Flight Center. “I’ve seen events of this magnitude maybe once every couple of years.”

“Dust clouds can travel long distances under the right conditions,” Seftor added. “The typical pathway for the transport of Saharan dust clouds is westward, all the way across the Atlantic to the Americas. In fact, Miami often suffers from poor air quality due to this dust. And we’ve tracked dust clouds from the Gobi desert being transported all the way across the Pacific as far the East Coast of the United States.”

The GEOS-5 atmospheric model from NASA Goddard pretty accurately forecast the trajectory and evolution of the storm between April 4 and April 9. Click here for an animation (9 megabytes) of the model prediction.