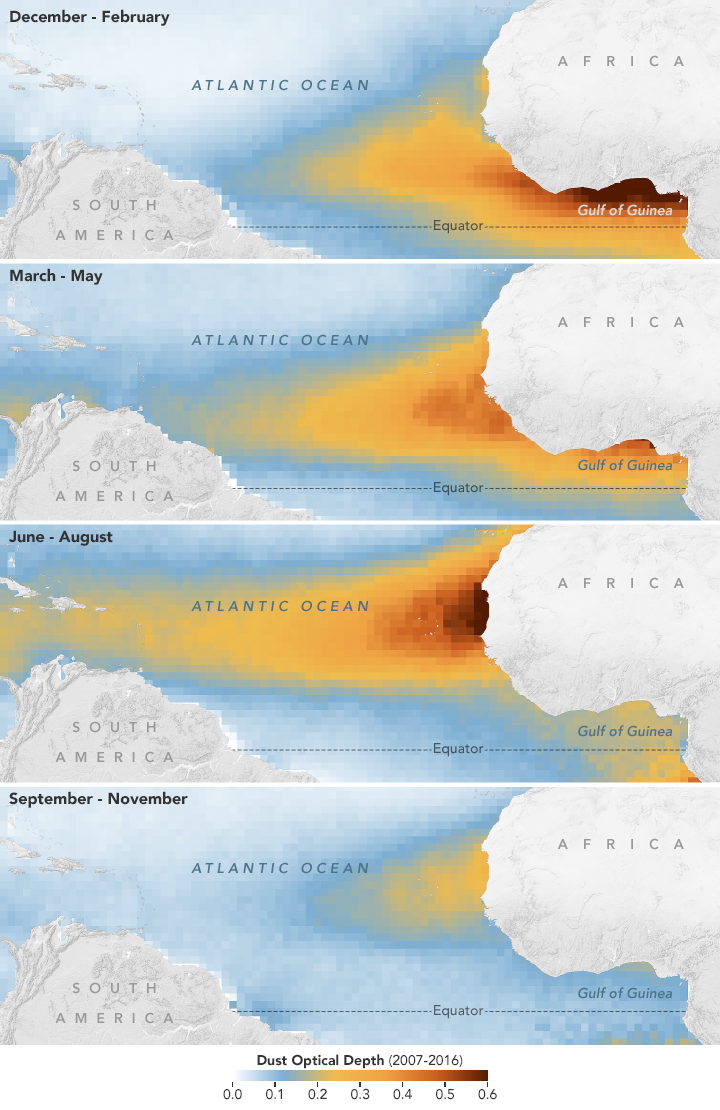 Individual particles of dust are small and easy to ignore, but on a grand scale, atmospheric dust directly affects all of us, and the planet, in many ways.

Particles of dust are typically comprised of metal oxides, clays, and carbonates. They most often accumulate in low-lying desert basins, often dried rivers or lakes. When winds lift particles up, they can spread across thousands of miles, circling the planet and fertilizing key parts of oceans and rainforests with critical nutrients, notably iron. They also can spread diseases, trigger asthma and other respiratory health problems, and darken skies so much that they cause traffic accidents and problems for pilots.

One of the most difficult to study—but far reaching—effects of dust is its influence on weather and climate. Dust particles can change air temperatures by blocking light, influence where clouds form and how they behave, and affect whether hurricanes or other types of storms break out. By fertilizing the sea, dust also helps influence the size and frequency of blooms of carbon dioxide-consuming phytoplankton, which could play a role in dialing global temperatures up or down.

North Africa is the largest source of atmospheric dust in the world by far. “It has the key ingredients: plenty of strong winds, sediment piled up in basins, dry weather, and little vegetation,” explained NASA atmospheric scientist Hongbin Yu, noting the El Djouf region in Mauritania and Mali and the Bodélé Depression in northern Chad are the sources of much of the dust.

The maps above, based on data analyzed by Yu and colleagues, shows where the Moderate Resolution Imaging Spectroradiometer (MODIS) observed dust moving out from Africa and over the Atlantic Ocean from 2007 to 2016. These optical depth observations are based on the amount of light dust particles scatter and absorb. The measurements capture dust throughout all levels of the atmosphere, not specific altitudes. The maps were first published in 2019 in the Journal of Geophysical Research–Atmospheres.

Notice the seasonality in the distribution of dust. In December and January, strong northeasterly winds—the Harmattan—from West Africa carry dust southwestward, putting the highest concentrations over the Gulf of Guinea, and extending dust plumes west toward South America. Over the course of the year, as wind patterns and the location of the Intertropical Convergence Zone (ITCZ) shift, the most concentrated dust band moves north. From June through August, particles stream from West Africa toward the Caribbean.

“Measuring the distribution of atmospheric dust is just the first piece of our research,” said Yu, who has been using satellites and other tools to study dust and other aerosol particles for two decades. “In order to understand the effect African dust has on the ocean, we have to determine how much dust gets removed from the atmosphere by rainfall.” That is where other NASA satellite sensors, like the Multi-angle Imaging SpectroRadiometer (MISR) on Terra and the lidar on the CALIPSO satellite, play a critical role. The CALIPSO lidar makes it possible to observe the height of different parts of dust plumes, which is key for estimating where dust drops into the sea. MISR excels at observing particle shapes in order to distinguish dust from other airborne material.

By analyzing observations from all three sensors—as well as the European Infrared Atmospheric Sounding Interferometer (IASI)—Yu and colleagues have created maps showing how much dust gets deposited in the ocean and where. The most efficient removal of dust occurs in winter, when the dust is following the more southerly trajectory. The researchers found that it tends to be at low altitudes then and gets intercepted by rains along the ITCZ.

“One of the most important things that comes out of this line of research is that we've realized that leading atmospheric circulation models like the Goddard Earth Observing System (GEOS) overestimate how fast dust is falling into the Atlantic ocean by 2 to 5 times,” Yu said. "Since in situ measurements [from ships or sensors on islands] of dust over the Atlantic Ocean are quite limited, satellites help fill data gaps, but models are still incredibly important for assessing the overall effects of dust.” 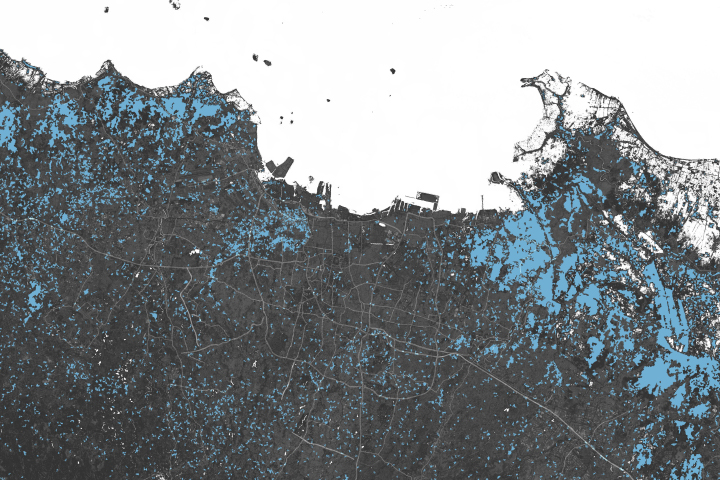