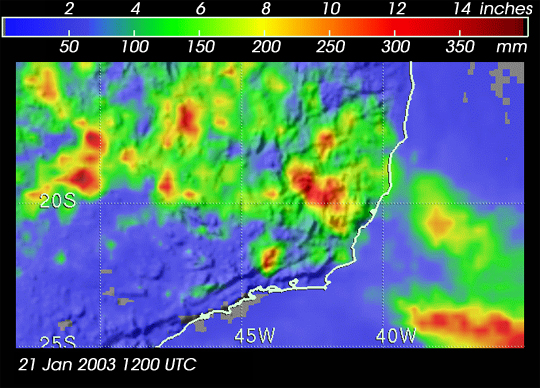 This dramatic image captures a week's worth of torrential rainfall over a small region near Belo Horizonte, Brazil, where the death toll from mudslides has been climbing. Mudslides developed in the mountainous terrain of the Brazilian Highlands where runoff from up to sixteen inches of rain swept through hillside villages. This is more rain than Denver, Colorado or Los Angeles, California receive in an entire year. The image was created using a technique that combines data from NASA's Tropical Rainfall Measurement Mission (TRMM) with other rainfall-measuring satellites.

The summer wet season is occurring over Brazil south of the Equator, and these locally intense rains were generated within a larger, more persistent pattern of rain called the South Atlantic Convergence Zone (SACZ). In the image, you can see the larger swath of the SACZ oriented from northwest to southeast across the interior of Brazil, and extending out into the Atlantic Ocean. The SACZ is a nearly stationary frontal zone that persists throughout the wet season. Smaller pockets of locally heavy rain accumulation, such as that shown near Belo Horizonte, develop where moist Atlantic air gets an extra lift by the mountainous terrain, causing the thunderstorms to become severe.

This image was created by Hal Pierce of the NASA Goddard Space Flight Center.