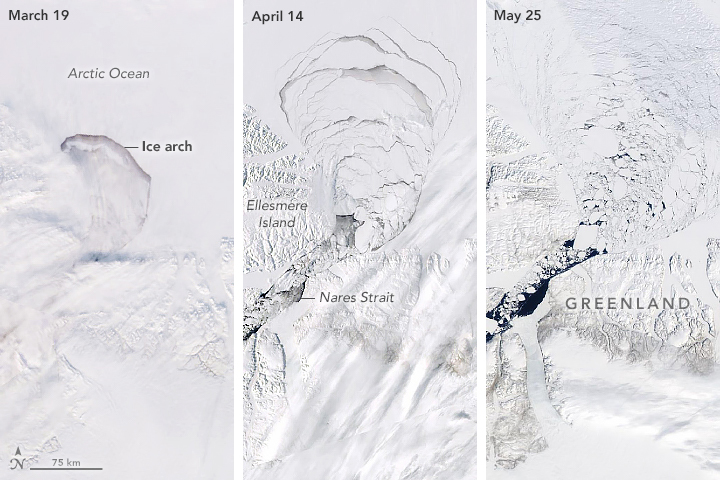 Arches, whether formed by nature or engineered by humans, commonly tower above the ground. Not this arch. Composed of sea ice, it spans the Nares Strait between Greenland and Ellesmere Island in the horizontal direction. But the relatively flat “ice arch” still has structural importance. It acts a gatekeeper, preventing sea ice from exiting the Arctic Ocean and drifting southward into Baffin Bay.

The arch is not a permanent fixture: It usually forms each year toward the end of autumn or early winter and breaks up by June or July. In 2019, however, the arch disintegrated in late March—months earlier than usual. The breakup is visible in this series of images acquired with the Moderate Resolution Imaging Spectroradiometer (MODIS) on NASA’s Terra and Aqua satellites, and the Visible Infrared Imaging Radiometer Suite (VIIRS) on the Suomi NPP satellite.

“The timing of the breakup affects the amount of old and thick ice that flows out of the central Arctic,” said Nathan Kurtz, a sea ice scientist at NASA’s Goddard Space Flight Center. “The early breakup this year will likely contribute to the overall loss of Arctic sea ice thickness.”

The left image shows the arch when it was still mostly intact on March 19, 2019. Notice the long, linear cloud streamers just south of the arch. This cloud type usually forms in the presence of strong winds, one factor that can help an ice arch collapse. By April 14 the solid pack of ice behind the arch was crumbling (middle), and by May 25 the broken bits were flowing freely through the Nares Strait (right).

Kurtz speculated that warm temperatures and thin ice could have contributed to the early breakup. “It has been an unusually warm winter for the Arctic, in particular the area in the Lincoln Sea where the ice arch forms,” he said.

Scientists at the University of Toronto are analyzing the 2019 data for more details about what caused the early collapse. In a research paper detailing the May 2017 collapse—previously the earliest breakup on record—the scientists blamed strong winds from the north, unusually thin sea ice in the Lincoln Sea, and an area of open water in front of the ice arch (a polynya).

“Luckily the Nares Strait isn’t that large compared to the much larger Fram Strait,” Kurtz said. “The overall impact likely won’t be that large, but it’s still another contributor to the loss of Arctic sea ice, which has been ongoing for quite some time.”