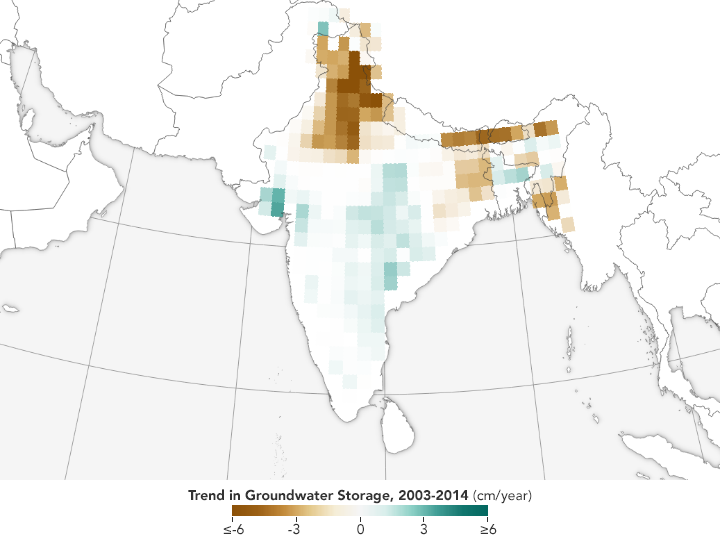 From gripping drought and the depletion of reservoirs, to pounding monsoon rains and devastating floods, water woes have become familiar to the people of India in recent years. But new research offers some good news: the water stored naturally underground appears to be rebounding in some parts of India.

The excessive withdrawal of groundwater from Earth’s aquifers is a global issue. But aquifers in some parts of the world are witnessing greater depletion than others. Studies indicate that in 2011, India pumped out 245 billion cubic meters of groundwater for irrigation. The equates to 25 percent of the total withdrawn globally that year. The present and growing demand for water in India has led groundwater experts to look closely at the region and its water policies.

In one recent study, scientists used ground and satellite observations to examine decadal trends, which are displayed in the map above. It shows groundwater trends across India as observed with data from the Gravity Recovery and Climate Experiment (GRACE) satellites between 2003–2014. Shades of blue indicate areas that have gained water, while browns are where losses were detected.

The greatest replenishment occurred in the western and southern parts of the country. For some of these areas—such as the Indian states of Gujarat and Andhra Pradesh—the gains mark a significant turnaround from water losses between 1996–2001.

Interestingly, rainfall does not entirely explain the reversal. In Gujarat, for example, annual rainfall actually decreased during the period of replenishment. Instead, the paper’s authors point to policy changes in groundwater management and conservation.

The researchers, including Soumendra Bhanja of Athabasca University (affiliated with the Indian Institute of Technology in Kharagpur and a visiting scientist at NASA’s Goddard Space Flight Center at the time of the study) show that groundwater gains in Gujarat and Andhra Pradesh happened alongside a measured reduction in power use for agriculture. (Traditionally, about 90 percent of groundwater is removed by wells powered by electricity.) In Andhra Pradesh, farmers have been trained in sustainable groundwater management practices, and there has been a discernable increase in irrigation via surface water.

Still, not all areas show the same trend. Rapid depletion of groundwater continued throughout the study period in northern and eastern India. “Despite continuing groundwater storage depletion in some parts of the country, sustainable management strategies could help preserve the precious natural resource,” Bhanja said.