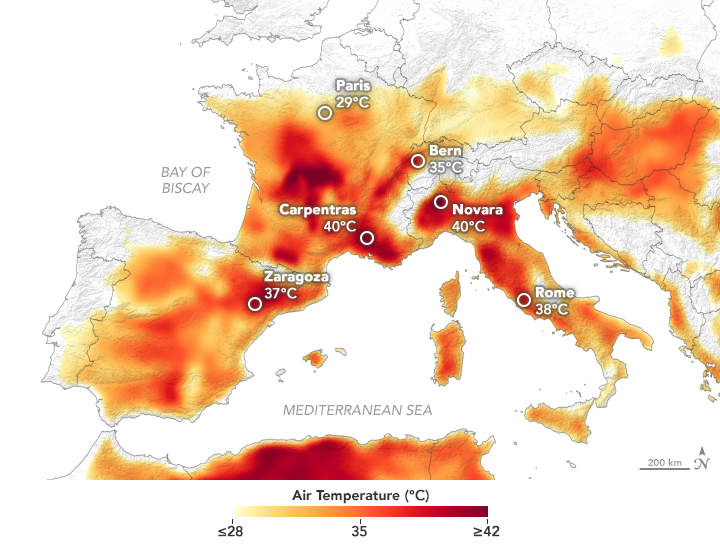 It’s early summer and Europe is already feeling the heat. Many parts of the continent saw the hottest temperatures so far for 2019, with some cities recording their hottest day on record.

The heatwave is apparent on this map, which shows temperatures across Europe on June 27, 2019. The map was derived from the Goddard Earth Observing System (GEOS) model, and represents air temperatures at 2 meters (about 6.5 feet) above the ground. The darkest red areas are where the model shows temperatures surpassing 40°C (100°F).

The GEOS model, like all weather and climate models, uses mathematical equations that represent physical processes (like precipitation and cloud processes) to calculate what the atmosphere will do. Actual measurements of physical properties, like temperature, moisture, and winds, are routinely folded into the model to keep the simulation as close to observed reality as possible.

On June 27, an awareness report from the Network of European Meteorological Services specified “very dangerous” temperatures—the highest alert level—in parts of Spain, France, Switzerland, and Croatia. The meteorological department in France listed numerous cities where records for the hottest June day were broken, many of which were set during the deadly heatwave in 2003. France’s national record for the hottest temperature (of any time of the year), set in 2003, was broken in the town of Carpentras, which hit 45.9°C (114.6°F) on June 28 at 4:20 p.m. local time.

The 2019 heatwave got its start in late June, when warm air masses from the Sahara first hit Spain and then spread to Central Europe. News reports also cite a pair of high-pressure systems responsible for drawing in the warm air and suppressing cloud cover. The exceptional heat was expected to last through the month.

Several fierce heatwaves broke temperature records across the continent in the summer of 2019.