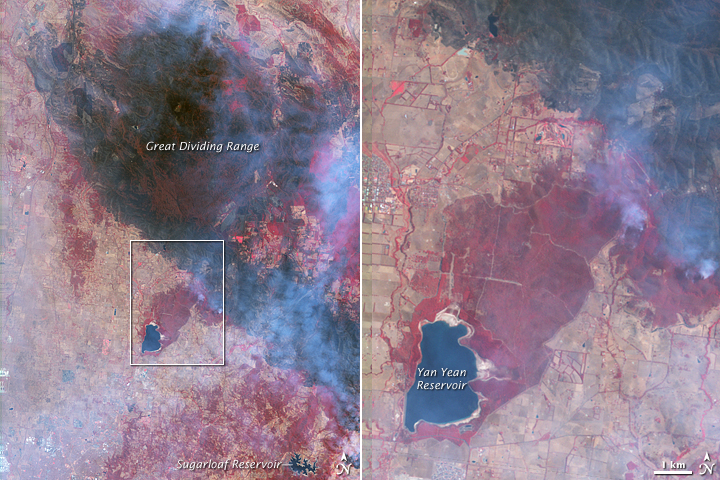 Among the areas devastated by bushfires in Victoria, Australia, in early February 2009 were Kinglake National Park and the surrounding rural and agricultural areas. The park is located on the slopes of the Great Dividing Range Mountains that arc northward through Victoria and along Australia’s East Coast. The park is only 65 kilometers (about 40 miles) north of Melbourne, and it is important to the city not just as a recreation area, but also because it protects some of the rivers and streams that supply the nearly four million city residents with water.

This image from the Advanced Spaceborne Thermal Emission and Reflection Radiometer (ASTER) on NASA’s Terra satellite on February 14 shows the large scale of the bushfire damage to the Kinglake area (left) as well as a close-up of the burned area northeast of Yan Yean Reservoir (right), one of the reservoirs that supplies Melbourne’s water. The false-color image uses a combination of visible and near-infrared wavelengths of light to make smoke more transparent and to highlight burned areas. Unburned vegetation is red, naturally bare ground is tan, and burned areas are charcoal.

According to news reports on February 16, the number of people killed by the bushfires was estimated to be 189, but search and rescue and forensic teams were still in the field. The fire activity had quieted, and the threat to communities in the Kinglake area had lessened. However, firefighters were still working to prevent the fires from doing further damage to the forests that are pivotal for filtering and storing water. According to fire reports from the Victoria Department of Sustainability and the Environment on February 18, these activities included a “backburn” in the Lobb Hill area, northeast of Yan Yean Reservoir. The plumes of smoke rising from the ridges in that area may be from these controlled burns. The large burn scar visible in the mountains to the northeast, however, is the result of the Killmore East-Murrindindi Complex South Fire, which charred more than 75,000 hectares (185,328 acres) in the preceding week.

Among the areas devastated by bushfires in Victoria, Australia, in early February 2009 were Kinglake National Park and the surrounding rural and agricultural areas.