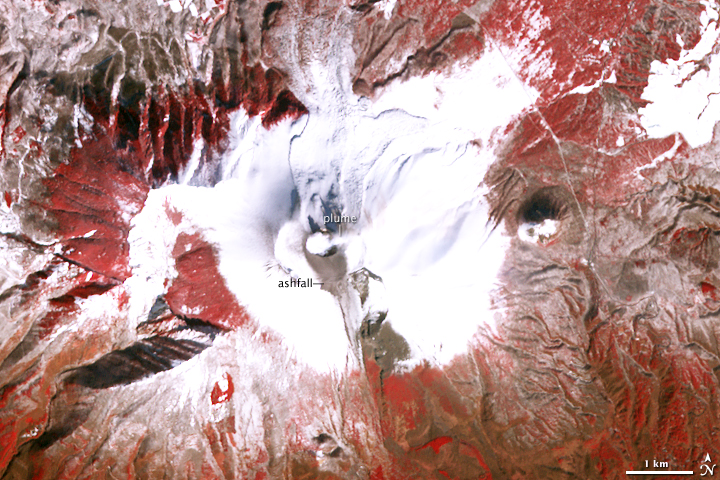 Asama Volcano on the Japanese island of Honshu showed signs of unrest starting in late January 2009, according to the Japanese Meteorological Agency. The agency found evidence of a thin ash layer near the summit as of January 21, as well as land deformation (a sign that magma is moving underground) and increased seismic activity as of early February. Between February 9 and 10, the volcano sent ash 3 to 4 kilometers (10,000 to 13,100 feet) skyward, and volcanic ash fell on nearby communities, the agency reported.

In the midst of Asama’s heightened activity, the Advanced Spaceborne Thermal Emission and Reflection Radiometer (ASTER) on NASA’s Terra satellite acquired this image of the volcano on February 7, 2009. In this false-color image, red indicates vegetation, gray-beige indicates bare rock, and white indicates snow or vapor. A generous cap of snow surrounds the volcano’s summit in this wintertime shot, but a dark gray-brown stain appears south of the summit, thanks to a recent ash eruption. A white plume of vapor also appears near the summit.

Asama Volcano, or Mount Asama, is a complex volcano that mixes features of different volcanoes. The volcano’s current summit sits just east of the remains of an older volcano that was wiped out by a Pleistocene landslide some 20,000 years ago.

Asama Volcano on the Japanese island of Honshu showed signs of unrest starting in late January 2009.