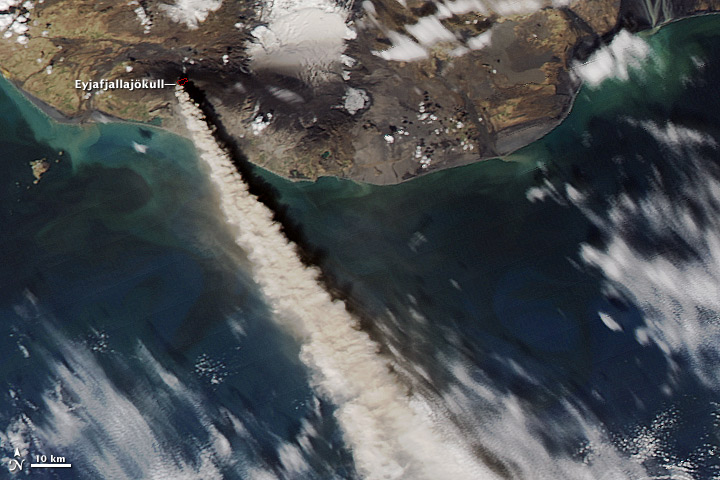 The plume of ash and steam rising from the Eyjafjallajökull Volcano reached five to six kilometers (17,000 to 20,000 feet) into the atmosphere on May 10, 2010, when the Moderate Resolution Imaging Spectroradiometer (MODIS) on NASA’s Aqua satellite captured this image. The ash is blowing southeast over the North Atlantic Ocean. Volcanic ash from previous days closed airports in Ireland and Portugal on May 10, said CNN.

Red outlines the location of a hot spot (probably lava) on the summit of the volcano. Around the volcano is a landscape of black. Dark ash covers the snow on the volcano as well as the land farther away. Farms south of the erupting volcano reported that coarse ash fell throughout the day on May 10, said the Icelandic Met Office. The icecap east of the volcano—Myrdals-jökull—is painted with two black stripes that reveal where the wind blew concentrated plumes of ash in previous days.

The eruption at Iceland’s Eyjafjallajökull Volcano began on March 20, 2010. Earthquakes beneath the volcano on May 10 indicate that magma is still flowing into the volcano for an ongoing eruption, said the Icelandic Met Office.