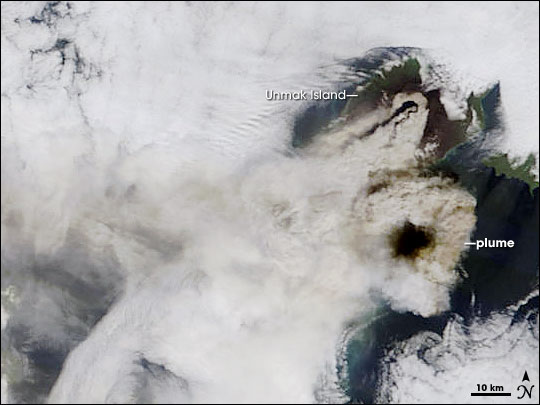 Nearly a month after its initial eruption on July 12, 2008, Okmok Volcano in Alaska’s Aleutian Islands remained active. On August 3, 2008, the volcano sent a column of volcanic ash skyward, according to the Alaska Volcano Observatory (AVO). The AVO reported that seismic tremors on the volcano were associated with the ash emissions.

The Moderate Resolution Imaging Spectroradiometer (MODIS) on NASA’s Terra satellite took this picture on August 3, 2008. This image gives a clear view of the volcano though a gap in the clouds. A plume of volcanic ash streams from the volcano’s summit, blowing toward the southwest. Southeast of the volcano, an ash cloud hovers over the ocean. This ash cloud likely results from an earlier volcanic plume that was blown to this area before the winds changed direction and began pushing ash toward the southwest.

Unlike the soft, fluffy material that results from burning vegetation, volcanic ash is not really ash at all, but microscopic shards of rock and volcanic glass. It is highly abrasive and slightly corrosive.