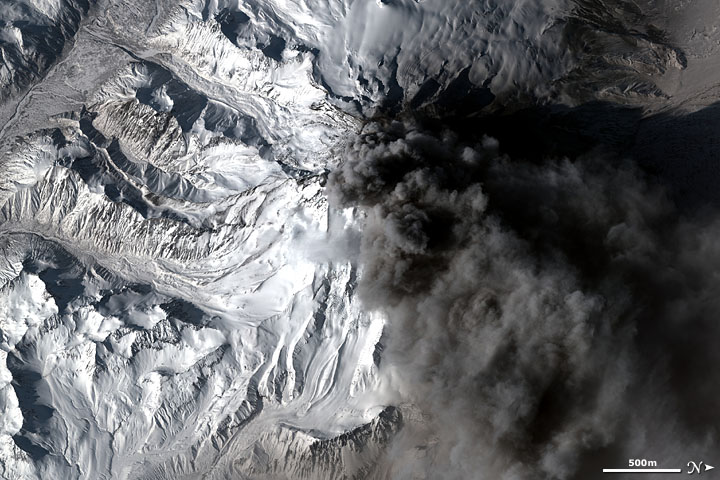 In contrast to the explosive eruptions of the previous week, Mount Redoubt’s ash emissions became more frequent but confined to lower altitudes on March 30, 2009. The Alaska Volcano Observatory reported that most ash plumes remained below 6,096 meters (20,000 feet) although some short bursts of activity pushed ash up to 8,230 meters (27,000 feet) that day.

The commercial satellite GeoEye-1 captured this high-resolution image of Redoubt’s plume on March 30, 2009. In this image, north is to the right, and sunlight brightens south-facing slopes. The volcanic ash billowing out of the volcano’s summit moves in a northerly direction. The dark color of this plume suggests that it contains more volcanic ash than steam.

Burned vegetation produces soft, fluffy ash, but volcanic ash has a completely different nature. Volcanic ash consists of tiny shards of rocks and volcanic glass. Extremely abrasive and mildly corrosive, this kind of ash can even conduct electricity when wet, sometimes leading to electrical outages. Winds can easily carry volcanic ash hundreds or even thousands of kilometers from the eruption site.

Redoubt’s initial eruptions in March 2009 primarily rained ash on communities north of the volcano, avoiding Anchorage. On March 28, 2009, however, Anchorage received a taste of the volcano’s activity: a light dusting and a noxious smell of sulfur, according to the Anchorage Daily News.

Located roughly 170 kilometers (106 miles) southwest of Anchorage, Mount Redoubt reaches an altitude of 3,108 meters (10,197 feet). Redoubt is a stratovolcano composed of layers of ash, lava, and rocks. Eruptive activity at the volcano from 1989 to 1990 interfered with air traffic throughout the region.