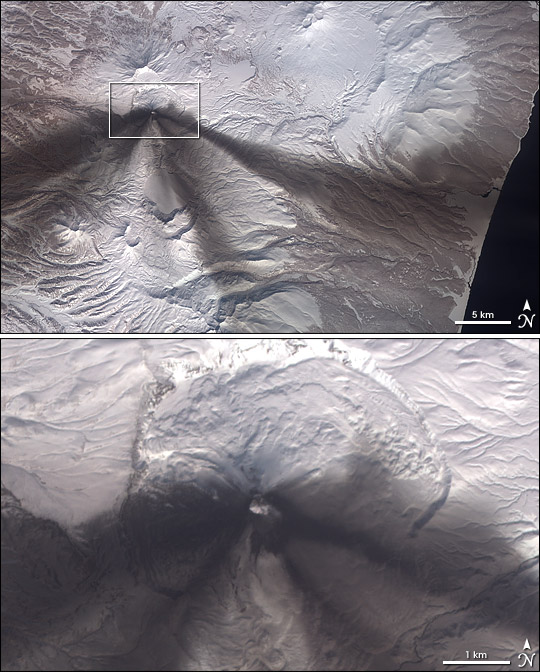 A volcanic eruption can produce gases, lava, bombs of rock, volcanic ash, or any combination of these elements. Of the volcanic products that linger on the land, most of us think of hardened lava flows, but volcanic ash can also persist on the landscape. One example of that persistence appeared on Siberia’s Kamchatka Peninsula in spring 2007.

On March 25, 2007, the Advanced Spaceborne Thermal Emission and Reflection Radiometer (ASTER) on NASA’s Terra satellite captured this image of the area around the Karymsky Volcano. In this image, volcanic ash from earlier eruptions has settled onto the snowy landscape, leaving dark gray swaths. The ash stains are confined to the south of the volcano’s summit, one large stain fanning out toward the southwest, and another toward the east. At first glance, the ash stain toward the east appears to form a semicircle north of the volcano and sweep back east. Only part of this dark shape, however, is actually volcanic ash. Near the coast, the darker color may result from thicker vegetation. Similar darker coloring appears to the south.

Volcanic ash is not really ash at all, but tiny, jagged bits of rock and glass. These jagged particles pose serious health risks to humans and animals who might inhale them. Likewise, the ash poses hazards to animals eating plants that have been coated with ash. Because wind can carry volcanic ash thousands of kilometers, it poses a more far-reaching hazard than other volcanic ejecta. Substantial amounts of ash can even affect climate by blocking sunlight.

Karymsky is a stratovolcano composed of alternating layers of solidified ash, hardened lava, and volcanic rocks. It is one of many active volcanoes on Russia’s Kamchatka Peninsula, which is part of the “Ring of Fire” around the Pacific Rim.