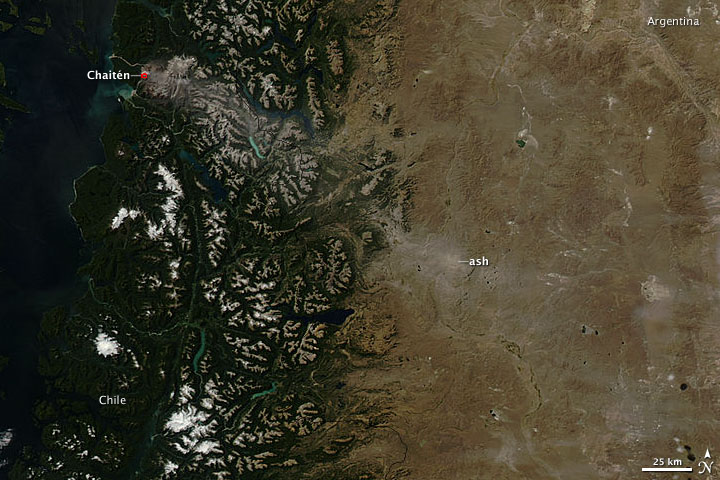 Days after a large-scale eruption from Chile’s Chaitén Volcano on February 19, 2009, volcanic ash lingered on the Patagonian landscape. The Moderate Resolution Imaging Spectroradiometer (MODIS) on NASA’s Aqua satellite captured this image of the ash on February 24, 2009. In this image, the ash-coated landscape appears subtly different from it surroundings, pale gray-beige instead of tan.

Unlike the soft material resulting from burned vegetation, volcanic ash actually consists of tiny, jagged fragments of rock, often small enough to be inhaled deep into the lungs. Volcanic ash is one of the more widespread hazards a volcano poses because winds can carry the ash tens of thousands of kilometers from the eruption site. Mildly corrosive and able to conduct electricity when wet, this ash can damage buildings and machinery and cause electrical outages. Ash-coated vegetation is unpalatable to livestock and wildlife, and the volcanic ash coating may eventually kill the vegetation.

The deposition of volcanic ash on the Patagonian landscape added to the concerns faced by Argentina in early 2009, already suffering from serious drought.