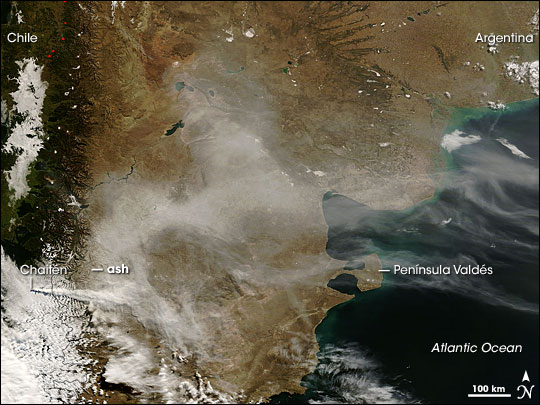 More than a week after its initial eruption, Chaitén Volcano in Chile continued emitting ash. The Moderate Resolution Imaging Spectroradiometer (MODIS) on NASA’s Terra satellite captured this image on May 10, 2008.

In this image, Chaitén’s plume rises well above the clouds that hover over the volcano’s summit. As it blows farther away, the plume turns more translucent, but remains discernible as it blows north and east over Argentina and the Atlantic Ocean.

Volcanic ash that has settled on the ground also appears in this image, especially visible as a pale gray-beige color directly east of the volcano. News reports on the volcano reported ash layers up to 1.5 meters (5 feet) thick in places. According to Australia’s ABC Science, the ash was expected to cause long-term damage to Patagonia’s pine and cypress forests, as well as fouling water bodies in the region. By coating the vegetation, the ash posed hazards to livestock and wildlife.

Volcanic ash actually consists of tiny jagged particles of volcanic rock and glass. Unlike ash produced by burning vegetation, this material is hard, abrasive, and slightly corrosive. ABC Science reported that ash from Chaitén had dusted hundreds of square kilometers in Argentina. Some of Argentina’s residents had begun to complain of eye irritation and breathing difficulties.