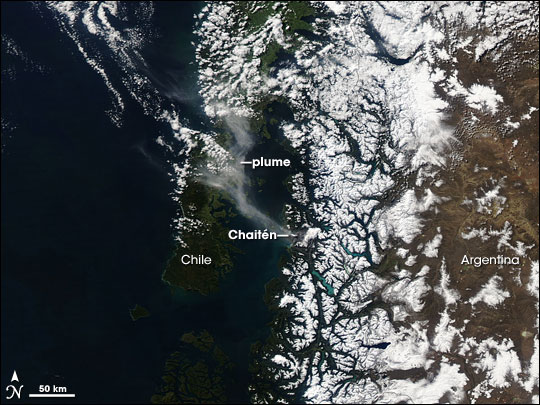 On May 2, 2008, Chile’s Chaitén Volcano erupted, blanketing the region in volcanic ash, and releasing plumes of ash and steam for several weeks. In the months that followed, the volcano continued intermittent activity. In early September, Chaitén released another plume. The Moderate Resolution Imaging Spectroradiometer (MODIS) on NASA’s Aqua satellite captured this image on September 3, 2008.

In this image, the volcanic plume wafts away from the volcanic summit, tracing a vague zigzag pattern toward the northwest. The plume can be distinguished from the nearby clouds thanks to its slightly darker color, caused by volcanic ash mixed with water vapor. Unlike the soft, fluffy ash from burning vegetation, volcanic “ash” really consists of tiny jagged particles of rock and glass.

Chaitén is a caldera volcano formed when the magma chamber beneath a volcano completely empties during an eruption, causing the summit to collapse into it. The collapse creates a circular depression. Prior to its May 2008 eruption, the volcano had been dormant for more than 9,000 years.