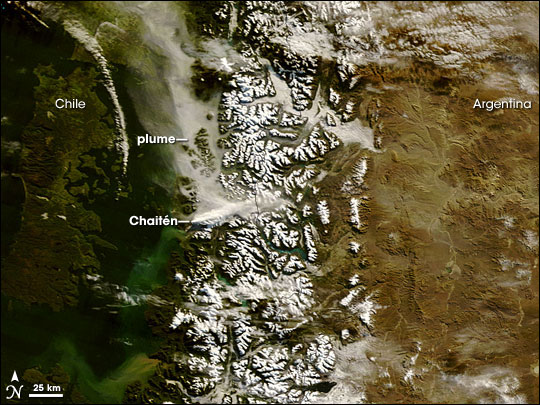 On May 2, 2008, Chile’s Chaitén Volcano erupted, blanketing the region in volcanic ash, and releasing plumes of ash and steam for several weeks. On July 1, 2008, the volcano continued emitting a plume, and the Moderate Resolution Imaging Spectroradiometer (MODIS) on NASA’s Terra satellite captured this image the same day.

In this image, the volcanic plume is lightest nearest the volcano, where an opaque stream of white blows east-northeast. Volcanic ash and steam also appear to the north, where the plume takes on a slightly darker color, appearing pale gray. As in an earlier image, acquired in late May, the volcanic plume appears to hug valley floors, leaving skies clear over mountain peaks. This phenomenon is visible directly north of the volcano and also toward the northeast. Mountain peaks, meanwhile, sport caps of bright white snow. In the coastal waters immediately southwest of the volcano, a blue-green plume could result from ash and possibly pumice in the water.

Chaitén is a caldera volcano formed when the magma chamber beneath a volcano completely empties during an eruption, causing the summit to collapse into it. The collapse creates a circular depression. Prior to its May 2008 eruption, the volcano had been dormant for more than 9,000 years.