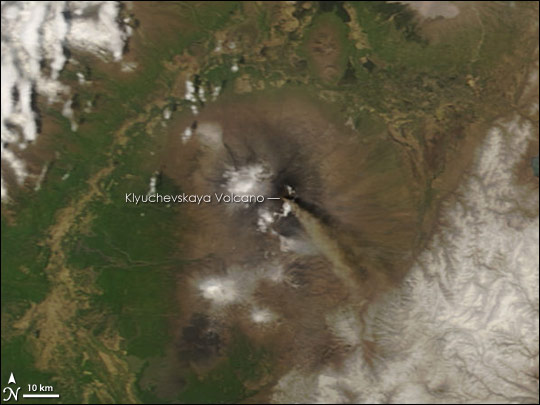 A thick plume of brown ash streamed southeast from the summit of the Klyuchevskaya Volcano on Russia’s far eastern Kamchatka Peninsula on June 3, 3007, when the Moderate Resolution Imaging Spectroradiometer (MODIS) on NASA’s Terra satellite captured this photo-like image.

The volcano’s status had just been downgraded from “red,” meaning that the volcano is either erupting or will soon erupt, putting significant amounts of ash into the atmosphere, to “orange,” meaning that activity at the volcano is elevated, but it isn't putting very much ash into the atmosphere. This color code was devised to advise airline pilots of the risk of flying over a volcano. Since fine volcanic ash can clog jet engines and shut them down, pilots avoid plumes of volcanic ash. Klyuchevskaya’s May eruption had diverted several flights away from the North Pacific, reported the Alaska Volcano Observatory.

On June 3, when this image was taken, the explosive activity had subsided somewhat, but the volcano was still highly active. In the large image, Klyuchevskaya’s northern neighbor, Sheveluch, also shows signs of activity. A red box marks the location of a hot spot on the volcano’s peak, hot lava extruding from the top of the dome, according to the Kamchatkan Volcanic Eruption Response Team. The MODIS Rapid Response System provides daily images of the volcano.

The Klyuchevskaya Volcano on Russia's Kamchatka Peninsula continued its ongoing activity through May and June 2007.