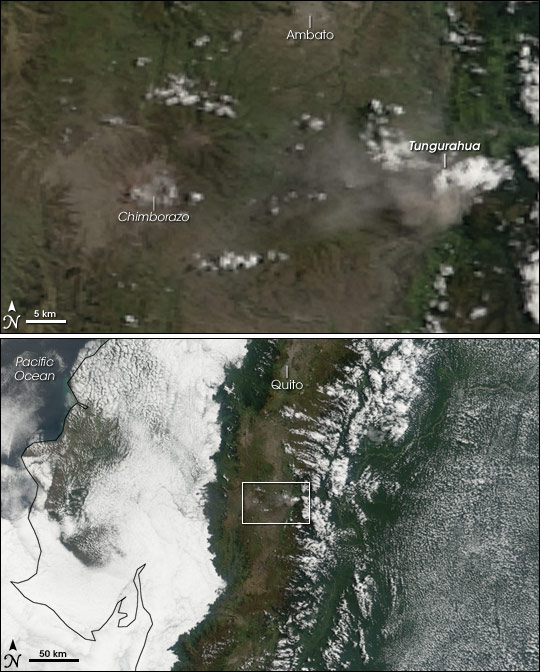 When the Moderate Resolution Imaging Spectroradiometer (MODIS) flying onboard NASA’s Terra satellite took this picture on July 17, 2006, Tungurahua Volcano was ejecting gas and ash for the fourth consecutive day. This burst of activity proved to be the volcano’s most powerful since 1999, according to Reuters. Besides volcanic ash and gas, the volcano produced molten rock that set fire to local vegetation. By July 18, the volcano’s activity had blocked roads, ruined bridges, covered nearby villages in ash, killed livestock, and prompted evacuations. Despite fears for their own safety, however, some villagers returned home to salvage some of their property. The BBC provided photos of the event on July 16, 2006.

These images show Tungurahua and its neighbor, Chimborazo. The top image shows part of the bottom image in greater detail. A gray-brown plume of volcanic ash and/or steam emanates from Tungurahua, mingling with nearby white clouds. The volcanic plume appears to spread out in all directions near the summit then blow generally westward toward Chimborazo.