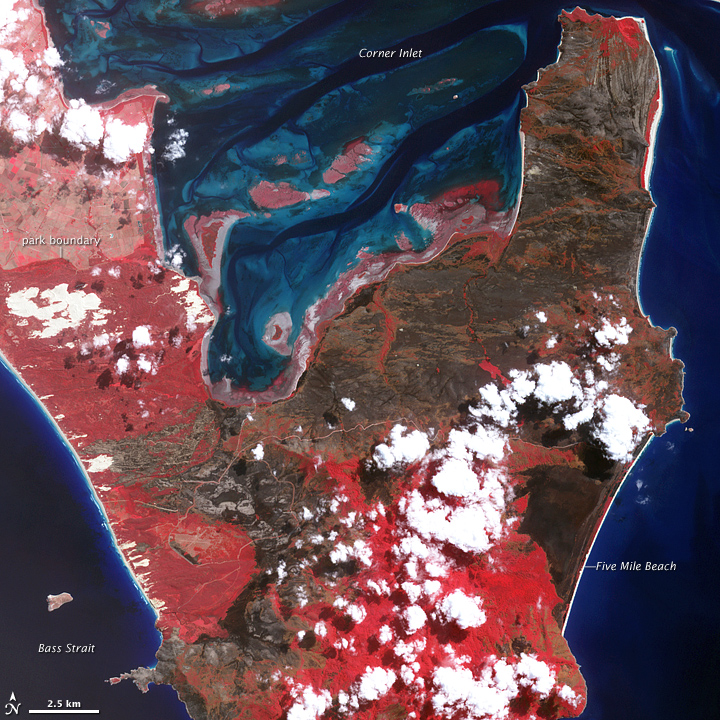 Wilson’s Promontory National Park, located at the southern tip of Victoria, Australia, was one of many areas scorched by large bushfires in February 2009. The Cathedral Fire, which was sparked by lightning on February 8, burned an estimated 25,200 hectares (62,271 acres) in the park before it was fully contained on March 14, the day this image was captured by the Advanced Spaceborne Thermal Emission and Reflection Radiometer (ASTER) on NASA’s Terra satellite.

The image combines visible light with near-infrared light; the resulting false-color image makes burned areas more obvious (charcoal-brown). Unburned vegetation is red, and areas where vegetation is naturally sparse or dormant are beige. Beaches and sandy spots are nearly as white as the clouds. North of the park boundary (upper left), the landscape is beige and light red, a rural-agricultural area where people have cleared the natural vegetation.

The park has a wide variety of habitats, including beaches, tidal mud flats, grass-covered dunes, marshes and swamps, and upland forests. The burn scar is darker in some places in others, which could be because the amount of burning there was more severe, but it could also be due to differences in the type of vegetation that burned and the characteristics of the soil. For example, the burn scar appears very dark in a swampy area inland of Five Mile Beach.

The park was closed for several weeks while managers assessed the damage and made sure it would be safe for visitors to return. Some areas will be reopened to the public beginning March 21.

NASA image by Jesse Allen, based on data from NASA/GSFC/METI/ERSDAC/JAROS and the U.S./Japan ASTER Science Team. Caption by Rebecca Lindsey.

East of Churchill, Victoria, a burn scar left by one of the deadly Australian bushfires in February 2009 sprawls across the landscape in this image captured by the Advanced Spaceborne Thermal Emission and Reflection Radiometer (ASTER) on NASA’s Terra satellite on March 14.