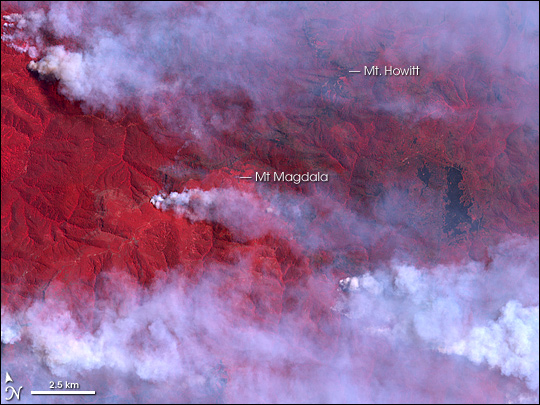 Throughout December 2006, large bushfires raged through national parks and other remote areas of Victoria’s Barry Mountains. Despite the fact that summer was not officially underway, the late spring weather was extremely challenging for firefighters: hot, windy, and dry. Rough estimates based on preliminary maps from the government’s Victoria Parks Website indicated that more than 470,000 hectares (close to 1.2 million acres) had burned as of December 15.

This image from NASA’s Advanced Spaceborne Thermal Emission and Reflection Radiometer (ASTER) on the agency’s Terra satellite shows fires burning in the heart of Alpine National Park, roughly 57 kilometers (a little over 35 miles) southeast of the town of Mansfield. The image uses not only visible light detected by ASTER, but also shortwave- and near-infrared light. Vegetation appears red, burned areas appear charcoal, bare ground (including roads) appears light beige, and smoke is gray. Plumes of smoke from individual fires billow southeast (the image is rotated counterclockwise off North) and spread into a blanket of haze.

Alpine is Victoria’s largest national park, covering 646,000 hectares (nearly 1.6 million acres) of the state’s highest mountains. A mixture of alpine and sub-alpine ecosystems exists in the park, including snow gum (a kind of eucalyptus) forest and high plains covered by grasslands. More than 1,000 species of native plants live within the park, as well as threatened and rare animals. Many areas and roads in the park were closed because of the dangerous fire conditions. 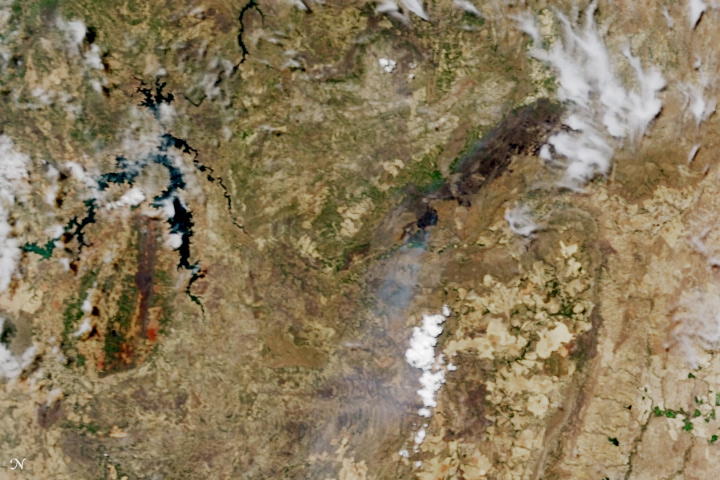