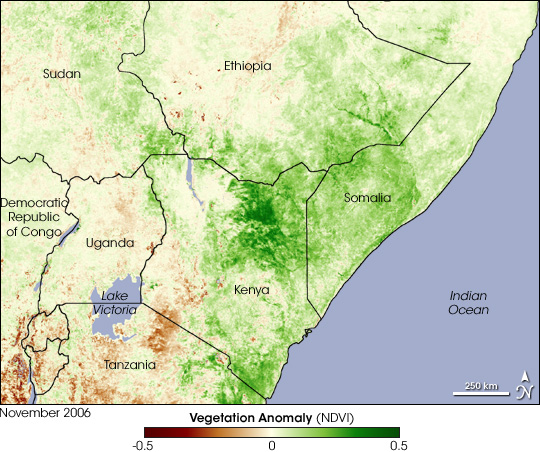 After devastating drought in 2005, eastern Africa experienced heavy rains and flooding during the 2006 “short rains” season that usually lasts from around October until December. Somalia, Ethiopia, Kenya, and Tanzania all experienced significant, sometimes deadly, flooding. What has been difficult for people and livestock, however, has been good for vegetation, including grazing areas and croplands.

The resulting green-up is evident in this image, which compares satellite-observed vegetation in November 2006 to the average November conditions from 2000-2005. Places where vegetation was more luxuriant than normal are shown in green, while places where vegetation conditions were below normal are colored brown. Places near average are yellow. The data were collected by the Moderate Resolution Imaging Spectroradiometer (MODIS) on NASA’s Terra satellite.

Among the most changed areas is Kenya’s Eastern province. Both the Marsabit National Reserve, which is next to the Ethiopia border, and the Merti Plateau to its south were dramatically more lush than they were near the end of 2005.

Evidence of extensive flooding along the Shebele River in southeast Ethiopia (Shabelle in Somalia) is clear: unusually green vegetation traces out the path of the river and several of its tributaries. Although water levels in Lake Victoria have rebounded somewhat from the extremely low levels measured in 2005, the vegetation in areas surrounding the lake appears to be slower to respond.