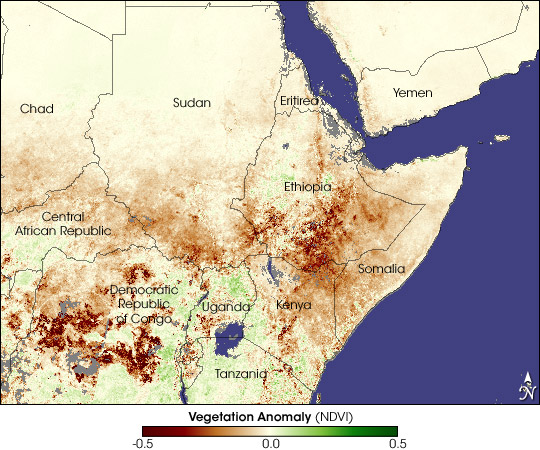 Six successive years of poor rain have left Eastern Africa in severe drought. Rain typically falls between February and June, and 2005 looked promising when rains started to fall in January. The promise dried up, however, when the rains stopped, leaving the latter half of March and the first half of April dry. The cumulative impact of poor rainfall on plants is visible in this vegetation anomaly image. The image was created using data collected by the Advanced Very High Resolution Radiometer between April 11, and April 20, 2005, compared to average conditions. Brown blankets regions where vegetation was less healthy and thick than normal, while green shows thicker vegetation than average. The band of brown that stretches west from Somalia reveals that the poor rainfall has withered vegetation across the region.

Rainfall is essential for reviving pastoral lands and filling water catchments in this water-scarce region. Life in the pastoral societies impacted by this drought revolves around livestock. The poor rain and lack of vegetation have led to a decline in milk production and livestock deaths—a formula for famine. Millions throughout Sudan, Eritrea, Ethiopia, Somalia, and Kenya are in need of food aid. In Ethiopia, where 7.5 million require food aid, the most severely affected populations live in the south and the east. This correlates well with the image, which shows the most drought-affected vegetation in southeast Ethiopia.

Heavy rains fell in Ethiopia and Somalia in late April, triggering deadly floods in southeast Ethiopia. Though tragic, the rains may help alleviate the drought.