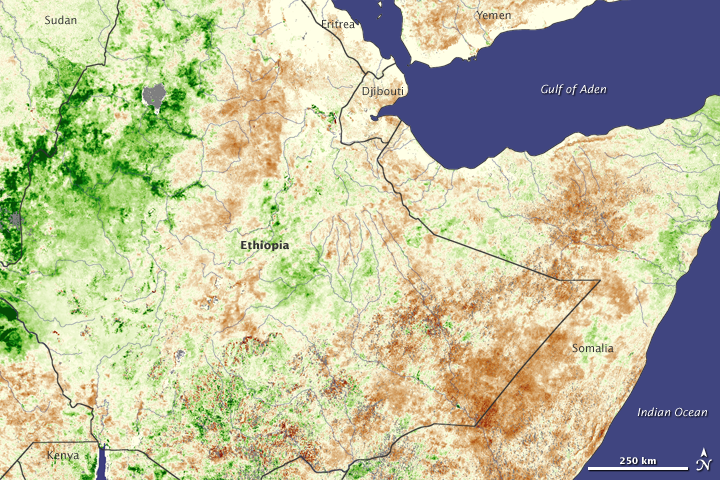 By the end of May 2008, millions faced hunger in eastern Ethiopia as crops failed and food prices soared, said the United Nations Children’s Fund (UNICEF). Two successive seasons of poor rains left eastern Ethiopia in drought, and the effect on vegetation is shown in this image. Made from data collected by the SPOT Vegetation satellite between May 11 and May 20, 2008, the vegetation anomaly image compares the relative healthiness of plants to average conditions. Areas in which plants were smaller, less thick, or grew more slowly than average are brown, while better than average conditions are illustrated in green.

Ethiopia presents a picture of contrasts. While the eastern half of the country withered in drought, western crop areas received ample rain and thrived. The drought limited the production of both food and cash crops like coffee, said the Famine Early Warning System Network. UNICEF estimated that 3.4 million people would need food aid in June, July, and August as crops continue to fail.

Drought crept over Ethiopia after the failure of rains in October and November 2007.

Following Ethiopia’s worst drought in decades, rainfall in 2016 is off to an uneven start.