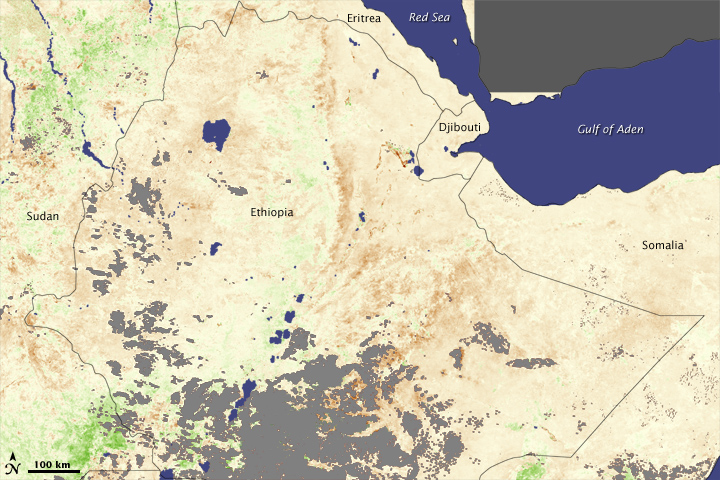 October is usually the beginning of one of Ethiopia’s rainy seasons. While not the primary rainy season, the rain that falls between October and January nourishes pastureland and provides water for livestock, crops, and people in the pastoral and agricultural regions of eastern Ethiopia. In 2008, the forecast looked bad. Rainfall had been normal for much of the country, but forecasts called for weak rains between October and January, warned the Famine Early Warning System Network (FEWS NET). In the East, where livelihoods depend on good pastureland for livestock, the lack of rain will likely lead to food insecurity.

FEWS NET identifies potential food insecurity by combining current observations with forecast models. One of the observations key to predicting food shortages is the view of vegetation from space, such as the image shown here. When poor vegetation matches up with resource-poor populations that might depend on a single crop or pastureland for survival, FEWS NET warns that the region may need food aid. The advanced warning gives governments and aid agencies time to plan a response before a full-fledged famine can develop.

This image, made from data collected by the Moderate Resolution Imaging Spectroradiometer (MODIS) on NASA’s Terra satellite between September 29 and October 14, 2008, shows vegetation conditions at the beginning of the October-January rainy season. Areas where plants were growing more quickly or more densely than average are green, while less vigorous growth is brown. Average growth is represented in off-white. Overall, plants in Ethiopia were growing slightly more poorly than average. Spots of green fringe Ethiopia’s western border where rainfall was more plentiful, while streaks of brown run through the eastern half of the country.

The forecast for the western half of Ethiopia called for above-normal rains. The rainfall may have already started. Areas where persistent clouds covered the region are light gray in this image. (The dark gray area at the top of the image indicates no data.) The clouds are clustered in the south and west.

In the east, two regions are particularly vulnerable to food insecurity if rainfall between October and January is as poor as it is forecast to be: the Afar region in northeastern Ethiopia and the southern portions of the Somali and Oromia regions in the southeast. In this image, some of the areas that are darkest brown, where vegetation was growing poorly, are in the Afar region. While much of the rest of the country experienced good rains earlier in the year, the Afar region did not. The southeastern corner of Ethiopia looks to be in better condition, with vegetation closer to average. Rains earlier in the year did help, but pastureland and water were still in short supply after several successive years of poor rain. A lack of rain at the end of 2008 would likely compound the shortages, said FEWS NET.