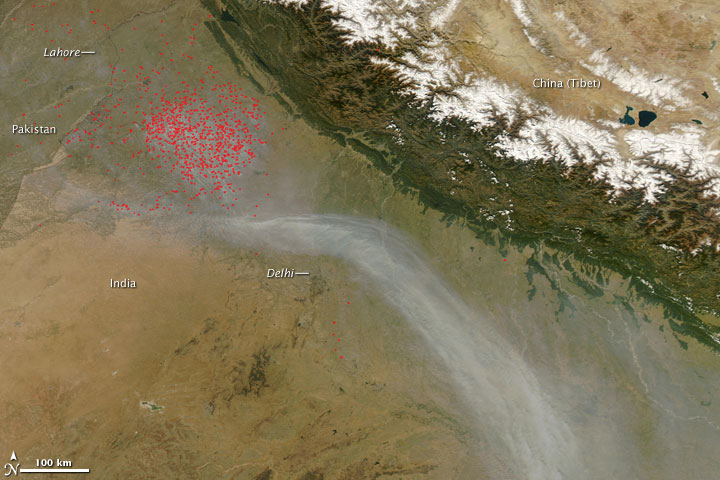 At the base of the Himalaya Mountains in northwestern India, the annual agricultural fire season was underway in the states of Punjab (closest to Pakistan) and Haryana (to the southeast) in early November 2008. In this Moderate Resolution Imaging Spectroradiometer (MODIS) image from the Aqua satellite on November 3, actively burning fires are marked with red dots.

Punjab occupies less than two percent of the area of the country, and yet it produces about two-thirds of the food grains in India. Wheat and rice are the two most commonly grown food crops. Farmers use fire to clear fields and get them ready for new plantings. Crop residues become a soil-fertilizing ash, and burning destroys some crop pests. Although the fires are not necessarily immediately hazardous, such widespread burning can have a strong impact on weather, climate, human health, and natural resources.

A plume of haze flows southeastward, along the path of the Ganges River, which is hidden from view. Although some of the haze is probably smoke from the fires, urban pollution is a major problem in this part of India. Several large cities are found here, including Delhi, India, where soot from diesel cars is a major (and still increasing) source of air pollution. Other images of the haze can be found in a related Natural Hazards event, Haze Along the Himalaya.

Scores of agricultural fires burned in the northwest Indian states of Punjab and Haryana on November 3, 2008.