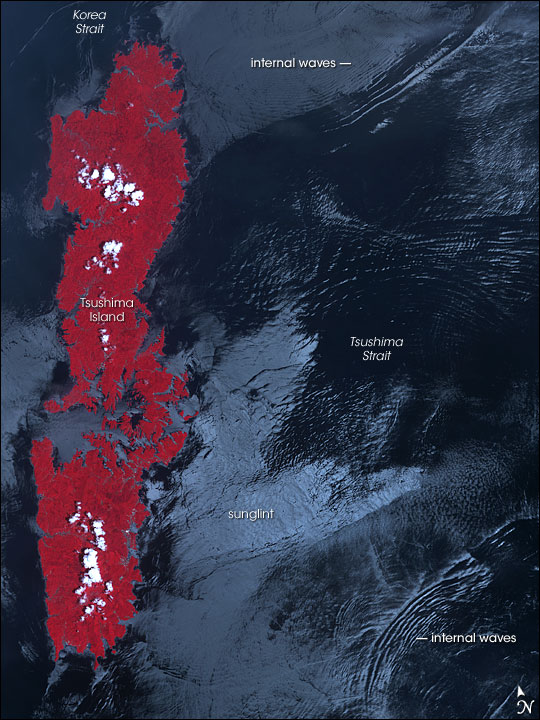 On July 4, 2000, the Advanced Spaceborne Thermal Emission and Reflection Radiometer (ASTER) on NASA’s Terra satellite captured this image of the area around Tsushima Island in the Korea Strait. In this false-color image (enhanced with shortwave- and near-infrared light), land surfaces appear bright red and clouds appear white. Of more interest, however, are the silvery blue waves that appear to be rippling the ocean’s surface. Many of the waves appear to propagate toward the north. In the lower right part of the image, the waves push northward in a series of concentric arcs. To the left, another, fainter series of arcs pushes in nearly the opposite direction.

When thinking of waves, most of us picture white-crested swells on the ocean’s surface, but some ocean waves occur in the lower depths without ever perturbing the water level at the surface. These so-called “internal waves” can occur because differences in temperature and salinity between deep water and surface water can cause the different layers to behave like completely different fluids. Warm water near the top may be much less dense than cold water lower down. The crests and troughs of waves passing through the deep layer occur at the interface between the water layers, but they don’t cause swells on the ocean surface.

But if internal waves don’t cause swells, then what is it that we see in this image? The wave pattern results from the influence of the internal waves on the surface current, rather than the surface height. When the crests of the internal wave pass below, water in the surface layer essentially flows down the sides of the crest and pools into the area overlying the waves’s troughs. Because surface water is diverging over the crests and converging over the troughs, biological material and natural oils on the surface are alternately dispersed and concentrated in a wave pattern. These natural “slicks” calm the water surface and change how it reflects light. These surface slicks reveal the presence of the underlying internal waves. The pattern is especially obvious in areas of the image where the Sun’s reflection off the water, called sunglint,is brightest.